Update Required To play the media you will need to either update your browser to a recent version or update your Flash plugin.
By VOA
Nov 7, 2016


The latest report by an independent investigative panel of experts confirms that the Assad regime is responsible for a third chemical weapons attack on the Syrian people.

In its October 2016 report, the Organization for the Prohibition of Chemical Weapons-United Nations Joint Investigative Mechanism, or JIM, concluded the Syrian Arab Armed Forces used weaponized chlorine in the town of Qmenas in 2015. This latest finding followed an August 2016 report where the JIM concluded that Syrian Arab Armed Forces used helicopters to drop barrel bombs filled with chlorine gas on the civilian population of Sarmin in 2015, and had attacked the town of Talmenes in a similar way in 2014. That report additionally found that Da'esh used mustard gas in an attack in 2015 in Marea. The Leadership Panel of the JIM reaffirmed its belief that it is absolutely critical to hold those who use or intend to use chemicals as weapons accountable for their acts. 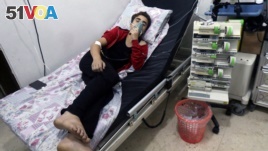 State Department Deputy Spokesperson Mark Toner noted that “the JIM's investigation corroborated what we have known for years: the Assad regime has systematically and repeatedly used chemical weapons against its own people.”

In a statement, U.S. National Security Council Spokesperson Ned Price condemned “in the strongest possible terms the Assad regime's defiance of the longstanding global norm against chemical weapons use.”

“The United States,” he said, “continues to work with our international partners to enforce accountability through appropriate diplomatic mechanisms, including through the United Nations Security Council and the OPCW (the Organization for the Prohibition of Chemical Weapons).”

National Security Council Spokesperson Price said, “We must send a strong signal that the use of weapons of mass destructions will not be tolerated by the international community.”