Update Required To play the media you will need to either update your browser to a recent version or update your Flash plugin.
Joe DeCapua
June 30,2015


The U.N. refugee agency said thousands of Burundians continue to flee political instability and violence. About 10-thousand refugees crossed into neighboring countries over the weekend before the government closed the borders prior to parliamentary elections.

It’s now estimated that at least 144,000 refugees have fled Burundi since the beginning of April. That’s when violence erupted after President Pierre Nkurunziza announced he would seek a third term.

UNHCR spokesperson Karin de Gruijl said most of those who fled over the weekend went to Tanzania and Rwanda. Closing the border crossings Sunday did not stop the exodus. 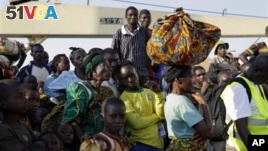 In this image taken Saturday May 23, 2015, refugees who fled Burundi's violence and political tension arrive in Kigoma, Tanzania, rafter making the journey on Lake Tanganyika. aT LEAST 144,000 have fled Burundi because they are afraid of getting caught in

“Refugees are still leaving the country. They’re using now informal border crossings – basically paths through the bush. They find their way into Rwanda and Tanzania and come then to our offices or our presence near the border to register themselves as refugees. And from there we take them to the camp(s) in the three countries: Tanzania, Rwanda and the Democratic Republic of the Congo,” she said.

While 144,000 thousand have been registered as refugees, many others have not. They’ve entered neighboring countries without being counted by aid agencies.

De Gruijl said, “There are also people who are going on their own, especially people going to cities or bigger towns, and have their own resources and do not necessarily register as refugees. So, we do think that the number might be higher.”

The UNHCR spokesperson said some were mistreated on their journey.

“There are different reports of harassment. People are also reporting that it’s becoming more and more difficult for them to leave the country. Not only because borders are closed, obviously, which makes things more difficult, but there are also roadblocks where militias and others are trying to take away their belongings. So, people are actually trying to leave the country, more or less secretly, taking as little luggage as they can and going through the bush.”

In the beginning, most of the refugees were women and children. Now, there’s a growing number of men. De Gruijl said many may be joining their families already in camps.

“We have been setting up camps or we have been moving people to existing refugee camps in most of the countries with the exception of Zambia at the moment because the numbers are very, very small.”

Overcrowding is becoming a problem at the Nyarugusu camp in Tanzania. It was already home to 50,000 Congolese refugees. They’re now joined by 60,000 Burundians. An alternative site is being sought.

The UNHCR is working with 17 other aid agencies to help the refugees, but funding is a problem. The agency has appealed for $207 million dollars for the Burundi crisis, but has received only 13 percent of the amount, so far.