Update Required To play the media you will need to either update your browser to a recent version or update your Flash plugin.
William Eagle
June 27,2015


The legislative elections will take place Monday – despite efforts to delay them. The European Union, African Union, East African Community and United Nations secretary general have asked that they be postponed until the opposition and the government can agree on how to ensure the elections will be transparent and inclusive.

Over the past week, grenade attacks shook several towns, killing four and injuring dozens. One of the country’s two vice presidents and two members of the electoral commission have fled, as have nearly 100 thousand citizens now refugees in surrounding countries. International and local civil society groups – citing government intimidation and chaos -- refuse to deploy election monitors. 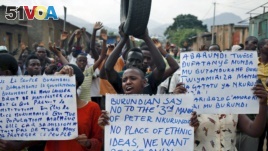 Protesters march who are against Burundi President Pierre Nkurunziza and his bid for a third term, in Bujumbura, Burundi, June 4, 2015.

Thierry Vircoulon, the Central Africa project director for the International Crisis Group, said that would enable the ruling party -- along with satellite partie -- to have enough seats in parliament with those satellite parties to change the constitution.

"They tried to do so at the beginning of 2014," he said, "but they failed by only one vote. So now after the elections, that will be possible."

Constitutional changes could overturn parts of the peace accord signed between warring Hutu and Tutsi 10 years ago. The agreement included a quota guaranteeing minority Tutsi representation in government.

Potential ruling party reforms could also end efforts to encourage parties to cooperate when making new laws.In recent years, a legislative quorum specified that a specific number of votes were needed to pass new laws. The arrangement has led large and small parties to seek a consensus.

Yolande Bouka, a researcher with the Institute for Security Studies in Nairobi, explained that the voting quorum is the number of votes needed to pass regular laws, while there are a different number of votes required in order to be able to change the constitution.

"But if you reduce that number which is what the government was trying to do in March of last year," she said, "then you definitely don’t needo to convince people outside of your party to be able to pass the laws that you want."

Bouka said the government is using the same behavior – including intimidation of civil society and the opposition -- as in the last elections in 2010. The opposition boycotted those polls as well.

She said the boycott this time is a cry for help to the international community.

Too little, too late

But Bouka said the international community waited too long before working to ensure that elections this year would be fair and transparent.

"The failure of the international community," she said, "came earlier than this year by approving the electoral process in 2010 saying ‘yes, we saw irregularities, we saw oppression of the opposition and intimidation of civil society organizations but on the day of the elections we did not see blatant fraud. Therefore, this is what we consider a free and fair election.'"

"This is where the international community made a mistake – because it already opened the door for the CNDD-FDD and President Nkurunziza to manipulate the system and still get away with it," she said.

Thierry Vircoulon of the International Crisis Group said the opposition has failed to pressure the government to hold open and inclusive elections. One problem was that the opposition is a coalition of groups with no clear leader for the public to follow. They also failed to get the same amount of public support as successful protests in Senegal and Burkina Faso against presidents seeking to extend their term limits.

"They definitely tried to imitate what happened in Burkina Faso by mobilizing in the streets," he said. "This was basically the result of having tried to fight on the legal front against the government over the past three or four years."

"When they realized it wouldn’t make any difference by going to court and by applying political pressure, they decided to take to the streets. But they did not manage to rally enough people behind them, and we didn’t have mass demonstrations in Bujumbura like we had in Ouagadougou," he said.

Ruling parties in other parts of Africa are looking for ways to extend term limits for their leaders. Uganda, Kenya and Burundi have passed laws in recent years restricting the media, opposition parties and civil society organizations.

Yolande Bouka said sitting presidents – and their opposition – are both watching the situation in Burundi for lessons on how to prevail in their own countries. She gave the example of the Democratic Republic of the Congo – where President Joseph Kabila is seeking a third term, which is barred by the constitution.

"If Burundi is able to run its electoral calendar as it wishes," she said, "despite the fact that conditions on the ground are definitely not conductive to free and fair elections, it could give ideas to somebody like Kabila who is in a much different situation in terms of support. He is getting a lot of push back even from his own his own coalition."

"But should he observe Burundi and President Nkurunziza is able to run this electoral campaign on its calendar and on its own terms, and see President Nkurunziza come back to power despite the constitution and the Arusha agreements, we’d have to observe how Kabila would want to replicate the situation," she said.

Burundi officials did not appear last week at a meeting of UN-sponsored talks to bring the two sides together. The chair of the ruling party, Pascal Nyabenda, told VOA the calls for dialogue were a disguise for opposition efforts to postpone elections and create a transitional government. He said that would violate the constitution – which says the president should be sworn in by August.

But Yolande Bouka said if the elections do take place Monday, the ruling party will be forcing its way to get what it wants – without any concern for internal or external legitimacy.