Update Required To play the media you will need to either update your browser to a recent version or update your Flash plugin.
Mike O'Sullivan
December 12,2015


Residents in California are remembering the victims of last week's terrorist shootings in San Bernardino, which claimed the lives of 14 people and left more than 20 injured.

Muslims and their Christian and Jewish neighbors gathered at a mosque to pray for the victims and their families.

U.S.-born Syed Rizwan Farook and his Pakistani wife, Tashfeen Malik, carried out the mass shooting at a gathering of local government workers last Wednesday killing 14 people and wounding 21 others. The shooting shook this part of southern California.

Corona is a 30-minute drive from San Bernardino, but people here experienced the same shock.

“We're close enough that it was almost like feeling like it's in your neighbor's back yard," said Ali Haxton, also a mosque member. 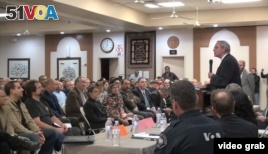 Muslims, and their Christian and Jewish neighbors gathered at a mosque to pray for the San Bernardino mass shooting victims and their families, Corona, Calif., Dec. 11, 2015.

Those who crowded the mosque shared a meal afterward.

The Rev. John Saville, an Episcopal priest who spoke to those gathered, said, “Here tonight, I think this is the way we respond after horrible things. We come together, pray together, listen and learn and share a meal together. This is the best way to respond.”

People also shared concerns for their security, and worried about a backlash against Muslims. They say they are all part of one community, and are hurting and healing together.