Call for Accountability in Magnitsky Case

Update Required To play the media you will need to either update your browser to a recent version or update your Flash plugin.
By VOA
Dec 29, 2017


Nine years ago, Russian lawyer and tax accountant Sergei Magnitsky uncovered a 5.4 billion ruble [$230 million] tax fraud scheme while auditing the Russia-based Hermitage Fund. He also found that a number of Russian Interior Ministry officials were deeply involved. For exposing this fraud, Magnitsky was arrested by Russian authorities and subjected to organized physical and psychological pressures while detained.

On November 16, 2009, he died in a pre-trial detention center in Moscow. Initially, Russian officials said his death was caused by cramped conditions and failure to provide adequate healthcare, but they later changed their story. Investigations were initiated, but all those implicated were acquitted and the charges were dropped. 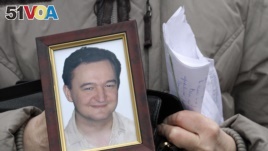 FILE - A portrait of lawyer Sergei Magnitsky, who died in jail, is held by his mother, Nataliya Magnitskaya, as she speaks during an interview with the AP in Moscow, Nov. 30, 2009.

On December 20, 2017, the U.S. Treasury Department's Office of Foreign Assets Control, or OFAC, designated five individuals pursuant to the Magnitsky Act. Significantly, among those sanctioned are head of the Chechen Republic Ramzan Kadyrov and Captain in the Chechen Ministry of Internal Affairs Ayub Kataev, who are responsible for extrajudicial killings, or other gross human rights violations against activists working to expose illegal activity by Russian government officials or individuals seeking to obtain, exercise, defend, or promote their internationally recognized human rights and freedoms

Also sanctioned are Alexei Sheshenya, Yulia Mayorova and Andrei Pavlov, who were involved in the fraud scheme originally uncovered by Sergei Magnitsky.

“Treasury remains committed to holding accountable those involved in the Sergei Magnitsky affair,” said OFAC Director John E. Smith. “We will continue to use the Magnitsky Act to aggressively target gross violators of human rights in Russia, including individuals responsible for extrajudicial killings, torture, and other despicable acts.”