Update Required To play the media you will need to either update your browser to a recent version or update your Flash plugin.
Joe DeCapua
December 18,2014


A growing number of fighters in Central African Republic’s two year old civil war are children. It’s estimated there may be as many as 10-thousand child soldiers, four times more than when the conflict began.

The charity organization Save the Children says both boys and girls are being recruited by former Seleka rebels and anti-balaka militias. Some of the kids are as young as eight.

Many lack access to food, education and health care. 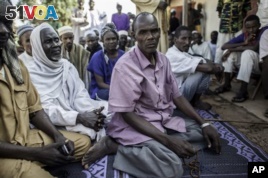 In this Aug. 28, 2014 photo, Hissein Abakar, sits in Boda, Central African Republic. Hissein, lost his 14-year-old son Ali when he was shot in the head by Christian militia fighters in Boda and attacked with machetes. In the fighting that ensued, at least eight others were killed. More than 5,000 people have died in sectarian violence in the Central African Republic since December, according to an Associated Press tally. (AP Photo/Sylvain Cherkaoui)

“Some are being abducted and recruited by force, like commanders who come in and take them -- very often just to use them to serve in [a] combat zone or to be their slave and sex slave. And others are joining for lack of protection, for lack of security and for lack of access to education, which is a great concern,” she said.

Some children said they joined armed groups due to pressure from parents or peers – or a desire to protect their communities or to seek revenge for the death of family members.

About two years ago, mostly Muslim Seleka rebels toppled President Francoise Bozize. Their leader Michel Djotodia became interim president. But many former rebels turned to banditry and attacked Christian and traditional religion communities. Then, last December, in response to those attacks, anti-balaka militias formed. They launched revenge attacks against Muslims. Djotodia resigned last January and an interim government was formed. However, ongoing violence has killed thousands of civilians and displaced hundreds of thousands of others.

Aubert said that many children are traumatized from witnessing violence or being forced to take part in it.

“That’s why Save the Children tried to respond on the ground with some programs to try to provide some psychological support to some of these children through some community-based program to try to assist those children – or to try to provide them with some education emergency response program. But so much more is needed,” she said.

But before Save the Children can help these kids, the organization must meet with the commanders of each armed group. Some agree to let the children go, others do not.

“There is a need for a more systematic and organized demobilization process. And that’s why one of the recommendations of the report is to call on the U.N. – on the peacekeeping operation – on the government – and on the partners to make sure that there is a proper demobilization strategy that’s been put in place [and to ensure] the peacekeeping operation has the capacity to reach out to those children to try to demobilize them and reintegrate them,” she said.

Some child soldiers are ordered to hold a talisman during attacks. It is believed by group members to have mystical powers that will protect them from harm. Bullets can quickly dispel that myth.

Education has been hit hard. Many children have not been to school in two years.

Aubert’s Colleague – Julie Bodin – is the organization’s Child Protection Manager in CAR. She said that Save the Children has set up – what are called – Child Friendly Spaces and Youth Clubs. These provide a safe place to learn and receive psycho-social support.

“So a Youth Club is a kind of group of teenagers, and we are developing some talks about the risk of recruitment, children’s rights. [The club aims] to make them understand that if they are associated with armed groups it is a violation of their own rights. And so, step-by-step, they start to change. And from [age] 14 to 18, we are doing [a] reintegration process through vocational training. We are developing income generating activities,” she said.

She said former child soldiers are usually placed in the care of foster families – often for several months -- while Save the Children tries to find their blood relatives. Bodin said it’s hoped 2015 will be more stable and allow humanitarian groups to reach all the children in need.

Despite the presence of U.N. and African peacekeepers, violence in CAR continues.