Update Required To play the media you will need to either update your browser to a recent version or update your Flash plugin.
By VOA
Feb 12, 2018


As economic and political conditions continue to deteriorate in Venezuela, President Nicolas Maduro has turned his sights on another target: national Catholic leaders who have raised their voices against the misery the corrupt Maduro government has visited on the Venezuelan people.

Maduro has called for an investigation into clergymen who have been critical of the government, claiming they may be guilty of a crime under a law passed in November by the illegitimate National Constituent Assembly, made up almost exclusively of supporters of President Maduro. 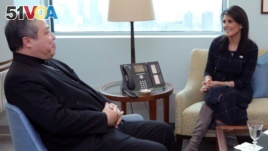 Among other measures, the so-called “Constitutional Law against hatred, for peaceful coexistence and tolerance,” punishes purveyors of messages of purported “hate” in broadcast and social media with penalties of up to 20 years in prison; and members of political organizations who spread supposed “hate” must be expelled.

Human Rights Watch described the law as “a clear threat to freedom of expression.” The Inter-American Commission on Human Rights said it could “generate a strong intimidation effect incompatible with a democratic society.”

Using this law as a weapon against Venezuela's religious leaders is Maduro's latest attempt to silence any opposition to his regime.

In 2017, Venezuelan bishops criticized the dismantling of constitutional order in the country, and they recently condemned the hastily announced elections Maduro insists must take place in April.

U.S. Representative to the United Nations Ambassador Nikki Haley denounced Maduro's call for a criminal investigation of the two Catholic bishops who spoke out against hunger and corruption under the so-call anti-hate law.

In a statement, she noted that “Maduro's reign of violence, repression, corruption and bankruptcy continues to punish the Venezuelan people. By targeting religious leaders – who promote peace and provide hope for believers – the regime continues to show that it cares only for preserving its own power and cares nothing about the basic human rights and welfare of its citizens. We continue,” Ambassador Haley said, “to stand strongly with the Venezuelan people in their battle to restore their democracy in the face of a brutal dictator.”