Update Required To play the media you will need to either update your browser to a recent version or update your Flash plugin.
2016-1-8

It is welcome news that Iranian officials have released Christian Pastor Farshid Fathi. A convert to Christianity, Mr. Fathi had served five years in prison on charges related to his faith. 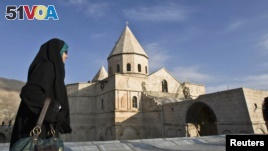 FILE - A woman visits Iran's St Thaddeus (Black Church), a medieval Armenian Christian place of worship, near Chaldoran, 650 km (404 miles) northwest of Tehran, close to the borders of Turkey and Armenia.
He was reportedly the last member released of a cohort of some 60 Christians who were arrested by agents of Iran’s Intelligence Ministry on December 26, 2010.

Unfortunately, Pastor Fathi’s release does not appear to be the sign of a let-up of the persecution of Christians in Iran. Human rights monitors report that in late December, Iranian officials in Isfahan entered the home of Christian convert Meysam Hojati, confiscating his personal belongings, including his computer and Bible, and moved him to an unknown location where he is still in detention. There are also reports that in Shiraz, nine Christians were arrested while attending church on December 25th.

Mansour Borji, a spokesperson for the Alliance of Iranian Churches, known as Hamgam, told the International Campaign for Human Rights in Iran that it has become common for security agents to arrest Christian converts in various cities when many communities celebrate Christmas.

“By making these arrests around this time,” he said, “the government hopes to intimidate converts by threatening them with heavy punishments…so that they would either leave the country or stop their [religious] activities.”

The latest human rights report on the plight of religious minorities in Iran by the UN Special Rapporteur for Human Rights in Iran notes that close to 50 Christians remain in prison solely because of their religious beliefs. The report make clear that other religious minorities are also targeted by the government -- most particularly the Baha’is, as well as Sunnis and Shi’a who challenge the regime’s theological orthodoxy, Jews, Yarsanis, and Zoroastrians.

When he was running for president in 2013, Hassan Rohani promised that “all religions, even religious minorities, must feel justice.” That promise remains unfulfilled. The U.S. calls on Iran to keep that promise and to stop depriving its people of the fundamental right to religious freedom.