Update Required To play the media you will need to either update your browser to a recent version or update your Flash plugin.
Michael Bowman
June 05,2016


WASHINGTON— In the U.S. presidential race, state primary contests conclude this week with America’s most populous state, California, as the biggest prize.

Tuesday could definitively settle the only remaining question in the 2016 presidential primary season: whether Hillary Clinton or Bernie Sanders is the Democratic presidential nominee.

But despite a tight race in California, both are focusing most of their firepower on Republican Donald Trump.

"Donald Trump's ideas are not just different, they are dangerously incoherent,” Clinton said in a foreign policy address last week. “He is not just unprepared, he is temperamentally unfit to hold an office that requires knowledge, stability and immense responsibility.”

"What you do when you don’t have any real answers to the real problems, you scapegoat people,” Sanders, a Vermont senator, said at a campaign stop Friday. “We’re not going to let Trump divide us up.” 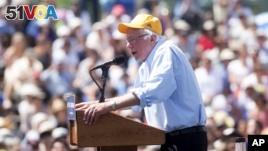 Trump is hitting back, blasting Clinton’s private email use as secretary of state.

Trump also grabbed headlines by saying a federal judge is biased against him due to his Mexican heritage, and by calling attention to a rally attendee's race.

"Oh -- look at my African American over here. Look at him. Are you the greatest?” Trump asked at a campaign stop, pointing into the crowd.

“The greatest” refers to the late boxing legend Muhammad Ali, who rejected Trump’s proposal to ban Muslims from entering the United States and urged a greater understanding of Islam. 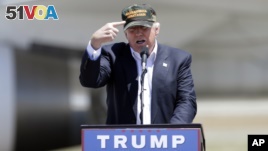 Republican presidential candidate Donald Trump gestures to a his camouflaged "Make America Great" hat as he discuses his support by the National Rifle Association at a campaign rally at the Redding Municipal Airport, June 3, 2016, in Redding, California.

Change of tactics urged for Trump

“I think that he (Trump) is going to have to change,” Republican Senator Bob Corker of Tennessee said on ABC’s This Week program.

A Trump's supporter wants a shift in Trump’s campaign tactics heading into the general election.

“It’s my hope that he’s going to transition. He has an opportunity to really change the trajectory of our country, and it’s my sense that he will take advantage of that,” he said.

Analysts say Americans should not expect an uplifting contest between Clinton and Trump.

"Because we have two candidates who are more distrusted than trusted, more disliked than liked, this becomes a race to the bottom,” said Norman Ornstein of the American Enterprise Institute.