Update Required To play the media you will need to either update your browser to a recent version or update your Flash plugin.
By VOA
Jan 29, 2018

HFNT prosecutors and investigators are tasked with investigating individuals and networks providing support to Hezbollah, and pursuing prosecutions in any appropriate cases. The HFNT will begin by assessing the evidence in existing investigations, including cases stemming from Project Cassandra, a law enforcement initiative targeting Hezbollah's drug trafficking and related operations. 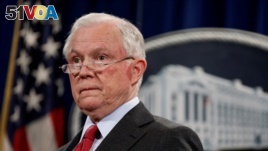 Acting Assistant Attorney General John Cronan of the Justice Department's Criminal Division will supervise the HFNT, and will convene a coordination meeting focused on identifying and combatting such support to Hezbollah.The HFNT will coordinate with, among others, investigators from the Drug Enforcement Administration, or DEA, including the DEA's Special Operations Division; the Federal Bureau of Investigation; Homeland Security Investigations; Assistant United States Attorneys; and attorneys from the Justice Department's Criminal Division and National Security Division.

“The Justice Department will leave no stone unturned in order to eliminate threats to our citizens from terrorist organizations and to stem the tide of the devastating drug crisis,” said Attorney General Sessions.

“In an effort to protect Americans from both threats, the Justice Department will assemble leading investigators and prosecutors to ensure that all Project Cassandra investigations, as well as other related investigations, whether past or present, are given the needed resources and attention to come to their proper resolution,” he said. “The team will initiate prosecutions that will restrict the flow of money to foreign terrorist organizations as well as disrupt violent international drug trafficking operations.”

“The investigation and prosecution of terrorist organizations that contribute to the growing drug crisis are a priority for this administration,” said Acting Assistant Attorney General Cronan. “At the Attorney General's direction, the HFNT will use all appropriate tools to aggressively investigate and prosecute those who provide financial support to Hezbollah in an effort to eradicate the illicit networks that fuel terrorism and the drug crisis.”