Update Required To play the media you will need to either update your browser to a recent version or update your Flash plugin.
By VOA
Feb 9, 2018


United Nations investigators are looking into reports of new chemical weapons attacks on civilians in Syria.

Paulo Pinheiro, chair of the UN's Commission of Inquiry on Syria said in a statement that “the commission has received multiple reports, now under investigation, that bombs allegedly containing weaponized chlorine have been used in the town of Saraqeb in Idlib and in Douma in Eastern Ghouta.”

In a statement issued February 5th, U.S. State Department Spokesperson Heather Nauert said the United States is “gravely alarmed by continued allegations of the use of chlorine gas by the Syrian regime to terrorize innocent civilians.”

After a meeting in January for the launch of the International Partnership against Impunity for the Use of Chemical Weapons, Secretary of State Rex Tillerson noted that Russia ultimately bears responsibility for the victims of chemical weapons in Syria, since Russia in 2013 committed to guaranteeing that its Syrian ally cease all use of chemical weapons. But, as Ms. Nauert said, “Russia has not lived up to its commitments.”

Instead, Russia has shielded Syria from accountability for its continuing use of chemical weapons. Several incidents were attributed to the Syrian regime by the Joint Investigative Mechanism, or JIM, an independent panel of impartial experts established in 2015 by the UN Security Council's Resolution 2235, with the full support of Russia. The JIM mandate expired in November 2017 after Russia vetoed three UN Security Council resolutions to extend the mandate of the Joint Investigative Mechanism and another resolution to establish a sanctions regime to designate those responsible for chemical weapons use in Syria. 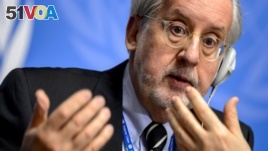 There are more cases of confirmed chemical weapons use in Syria that, in the absence of JIM, have not been investigated to determine attribution.

In recent remarks to the Security Council, U.S. Permanent Representative to the United Nations Nikki Haley said, “It's a true tragedy that Russia has sent us back to square one in the effort to end chemical weapons use in Syria. But we will not cease in our efforts to know the truth of the Assad regime and ensure that the truth is known and acted on by the international community...We are motivated by the urgent need to end the unique and horrible suffering chemical weapons inflict on innocent men, women, and children of Syria. The Syrian people are counting on us.”