Update Required To play the media you will need to either update your browser to a recent version or update your Flash plugin.
By VOA
Jun 7, 2017


There has been a spike in violence in one of Africa's poorest and most war-torn countries, the Central African Republic, known as CAR.

The United Nations Office for the Coordination of Humanitarian Affairs released a report this month saying that “the frequency and brutality of attacks against communities have surged to levels last seen in 2014. Entire towns have been emptied, houses burnt down and women and children brutally killed.”

The terrifying violence by armed militias in the CAR started in 2012 and intensified when a mostly Muslim rebel group, the Seleka, overthrew President François Bozize in 2013. Atrocities committed by the Seleka gave rise to a predominantly Christian group to counter it, the anti-Balaka, which similarly committed untold human rights abuses. Sectarian attacks by each group against each other and against innocent civilians devastated the country. 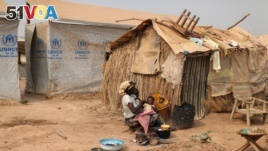 A woman takes care of her child in a camp sheltering internally displaced people in Bangui, Central African Republic. (File)

An accord agreed to in 2015 by the rival militias requiring them to disarm, as well as a presidential election in 2016, raised hope for a new and more peaceful future for the country.

But many armed rebels did not disarm, and violence has continued; and, as the UN has documented, recently escalated.

The security situation in CAR deteriorated last month, leading to more than 300 people killed and over 100,000 displaced. In southeastern CAR, six peacekeepers from MINUSCA, the UN peacekeeping mission in CAR, were killed near the town of Bangassou. In the central town of Bria, violence between rebel groups resulted in thousands of civilians pouring into makeshift camps.

The United States is deeply concerned by the recent violence.

In a written statement, State Department Spokesperson Heather Nauert said, “We strongly condemn these acts of violence and the targeted attacks against humanitarian actors whose sole purpose in the CAR is to provide lifesaving support to the population.”

Spokesperson Nauert wrote that the United States mourns the deaths of the UN peacekeepers, as well: “The security and support provided by MINUSCA are essential for the CAR to move beyond crisis,” she noted.

“We commend President [Faustin-Archange] Touadera and his government for their commitment to justice, the rule of law, and accountability for perpetrators of mass atrocities, including through the creation of the Special Criminal court,” said Ms. Nauert. “The United States fully supports justice and reconciliation, not only as measures for individuals who have suffered – but as essential steps towards building a peaceful and inclusive CAR.”