Update Required To play the media you will need to either update your browser to a recent version or update your Flash plugin.
By Emilie Iob
Oct 18, 2016


KINSHASA, DRC — The political parties taking part in the national dialogue in the Democratic Republic of Congo have adopted an agreement which delays elections by nearly two years to April 2018 and puts in place a power-sharing government to rule the country in the interim. But the main opposition coalition has rejected the deal.

After a month and a half of discussion, the 300 delegates adopted an agreement aimed at ending months of political crisis in the DRC. The electoral commission has said it is nowhere near ready to hold polls as scheduled in November.

The country's main opposition coalition boycotted the talks and has accused President Joseph Kabila of seeking to unlawfully extend his 15-year rule of the vast Central African nation.

Violent protests one month ago in the capital left at least 56 people dead and several political headquarters torched. 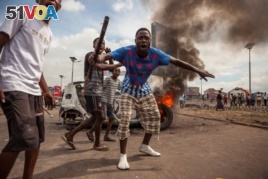 FILE - Demonstrators gather in front of a burning car during an opposition rally in Kinshasa, DRC, Sept. 19, 2016.

The new agreement allows Kabila to stay in power until the next presidential poll, but he will be joined by a member of the opposition in the post of prime minister.

“When you read the agreement, you will see that each party has made a lot of concession, in a bid to go to free, fair and peaceful elections accepted by everyone,” said Emmanuel Ramazani Shadary, secretary-general of the president's party, the PPRD.

Shadary added that the agreement is open to all political parties, even those who didn't take part in the dialogue.

That would be the majority of the opposition, known as the Rassemblement, or the assembly. They are demanding a more inclusive forum.

“That dialogue is not a constituent assembly. It is not a Parliament. Who gave them the power to take resolutions which go against the Constitution?” asked opposition leader Franck Diongo.

The Rassemblement has called for a general strike on Wednesday. They say President Kabila must step down at the end of his mandate on December 19.