Update Required To play the media you will need to either update your browser to a recent version or update your Flash plugin.
Joe DeCapua
June 23,2015


While progress has been made to preserve endangered animal, plant and other species, a new report said successes are being overshadowed by declines. The International Union for Conservation of Nature warned many species face lethal threats.

The IUCN is the world’s oldest and largest global environmental network. It has more than 77,000 species on its Red List and warns that nearly 23,000 of them are threatened by extinction. Some 830 are listed as being extinct. The list indicates how fast the world is losing biodiversity.

Craig Hilton-Taylor -- head of the organization’s Red List Unit -- said humans have been getting better at preserving species. 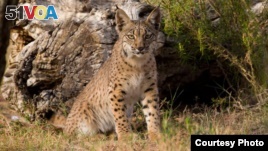 Much progress has been made to save the Iberian Lynx. Mature cats numbered just 52 in 2002. (Credit: IUCN)

“Yes, we have. We have built up quite a good set of tools and techniques for conserving species and their habitats. We know in many cases what we should do and how to do it. We are constantly surprised though by new emerging threats, which take us by surprise. But after some research and hard work we soon work out ways of dealing with new threats as they emerge.”

But he said knowing what to do is not the issue. The Red List points out where to take action and what species are at risk.

“The big issue really is to try and get enough people and resources to actually do something about it – to get the governments to have enough political will to invest in conservation and also engaging in the general public as well. So it cuts across all levels of society,” he said.

One of the big conservation success stories is the Iberian Lynx in Spain. There were just 52 mature cats in 2002. Today, there are 156. It may not seem like a lot, but it’s enough to remove the Iberian Lynx from the Critically Endangered list.

Another example is the Guadalupe Fur Seal. It was twice thought to be extinct. There were 20,000 in 2010.

On the other hand, 99 percent of the tropical Asian slipper orchids – a prized ornamental plant – are threatened with extinction. That’s due to a huge illegal trade in the slipper orchids and habitat loss due to development.

Hilton-Taylor said, “Most people around the world, they know orchids. They will either be growing them or will have seen them or will have them in their house as cut flowers. They are truly spectacular flowers.”

And then there’s the African lion. It’s on the IUCN’s Vulnerable List.

The lions face habitat loss, poaching and conflict with humans. Prey animals are on the decline in some areas causing lions to kill livestock.

Hilton-Taylor said that the International Union for Conservation of Nature takes a slow approach before declaring a species extinct.

“So, for example, one of the species on the list this time was a species of orchid from Madagascar. It was last seen in 1898 – over a hundred years ago. But we still don’t declare it extinct because there are still little patches of forest that haven’t been surveyed properly. There’s a remote chance it may still be living on a tree top somewhere that we just haven’t looked yet. So, it takes a long time to declare something extinct.”

A recent study in the journal Science Advances says the sixth mass extinction in the Earth’s history has begun. The study, like the IUCN, says humans are the driving force behind unprecedented extinction rates. For example, since 1900, nearly 480 vertebrate species have gone extinct.

The IUCN reported no new species have been declared extinct, but 14 have been assessed as Critically Endangered.

“The whole acceleration of the extinction is very much a human factor. So, it’s the demand for land for agriculture; building cities, roads. Extraction of minerals has huge impacts. Pollution events. So, there are a whole lot of different activities from people that reduce population sizes, reduce ranges, that have impacts on these species and drive them towards extinction,” he said.

Hilton-Taylor said environmental legislation can help preserve species, but he says much more needs to be done to protect habitats.

“You can go around and set areas of land aside as protected areas, as national parks with nature reserves. And make sure those networks are well connected to each other so species can move between different areas. But you can’t conserve all the land," he said. "You have to look at how we manage the land outside of the protected areas. So, putting into place effective management and restoration projects can restore habitats and ecosystems back to how they lived before.”

Hilton-Taylor said sometimes farmers need to be compensated not to cultivate their land and allow the natural habitat to remain. This was done to save the Iberian Lynx. And sustainable fishing methods may help save Gobies, one of the largest families of marine fish. Many of their coral reef homes have disappeared and they are more vulnerable to invasive Lionfish.