Update Required To play the media you will need to either update your browser to a recent version or update your Flash plugin.
By VOA
Nov 1, 2016


Trafficking in persons, also known as human trafficking or modern-day slavery, is a crime involving the exploitation of someone for the purposes of compelled labor or a commercial sex act through the use of force, fraud, or coercion. Human trafficking is a global problem and no country is immune, not even the United States.

“The notion of modern-day slavery is one that touches everybody's conscience and it is one of fundamental, basic human decency,” said Secretary of State John Kerry. “The fight against human trafficking is about far more than merely doing the right thing,” he said. 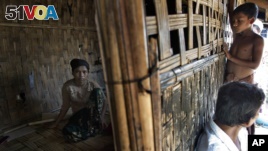 “Trafficking in persons is an assault on human rights and it's a threat to global stability. It undermines the rule of law, it breeds corruption, it spreads disease, it widens the gap between the haves and the have-nots, and it tears whole families apart. So it's counter to every single thing that we are trying to accomplish in the field of development and everything that we would like to see in our communities and in communities elsewhere in the world as we try to live up to the 2030 development goals.”

"There is nothing inevitable about trafficking in human beings. That conviction is where the process of change really begins—with the realization that just because a certain abuse has taken place in the past doesn't mean that we have to tolerate that abuse in the future or that we can afford to avert our eyes,” wrote Secretary of State Kerry in the introduction to this year's Trafficking in Persons Report, which was issued in June.

"Ending modern slavery isn't just a fight we should attempt—it is a fight we can and must win.” While more work is required to tackle the root causes and consequences of human trafficking, the United States continues to be a leader in the global movement to end modern-day slavery. By working together, sharing information, and partnering with a broad range of organizations, the U.S. government continues to explore new and innovative approaches to end the plight of trafficking victims.