The U.S.-led Global Coalition has achieved great successes against ISIS on the battlefield in Syria and Iraq. We celebrate the coalition's gains on the ground but, notes U.S. Coordinator for Counterterrorism Nathan Sales: “We also have to be mindful that ISIS is adapting and it's going to be up to us to adapt along with them.”

“Every square kilometer of territory that's liberated means women and children and men who no longer have to live under the false Caliphate that ISIS has tried to construct. The success that we're having though, against ISIS in Syria and Iraq doesn't mean that the struggle is over. It simply means that the struggle is entering a new stage. And that new stage is one in which ISIS might be sending operatives across the world to carry out attacks. Another, related problem is those who may be inspired by ISIS to commit attacks.”

“Homegrown terrorism is a threat that is on the rise and it is one that we are going to be focusing on,” he said.

The United States and its Global Counterterrorism Forum partners recently announced new initiatives to address threats posed by returning foreign terrorist fighters and by homegrown terrorists. Two separate programs seek to effectively assess the motivations and sympathies of returning family members and to explore the factors that drive people to become homegrown terrorists and identify them before they can strike. 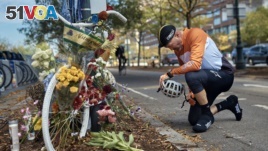 Eric Fleming, 41, stops by to express his condolences in front of a bike memorial where people leave flowers to remember the victims of an ISIS-inspired attack in New York.

“ISIS spreads a message of hatred, a perversion of the tenants of Islam. It's essential for us and it's essential for our partners around the world to counter that message of hate and intolerance and violence. We have to work with not just other governments, but civil society organizations, religious leaders, community organizers, private citizens who are in a position to effectively rebut these false claims.”

The U.S. will continue to adapt and work together with its partners within both government and communities to realize a world that is secure against terrorism.