Update Required To play the media you will need to either update your browser to a recent version or update your Flash plugin.
By VOA
Aug 30, 2016


For people living in former conflict zones, war may not end for years after the last shot has been fired and the peace agreement is signed. Land mines and unexploded munitions, remnants of the war between the Revolutionary Armed Forces of Colombia and the Colombian government, stand in the way of post-accord stabilization and reconstruction, and inhibit long-term development.

They render millions of hectares of land unusable, preventing farmers from tending their fields and herders from pasturing their cattle. In many regions of Colombia, ordinary travel is dangerous because roads are lined with minefields and a misstep could cost a passerby his or her life. Even everyday activities like gathering wood or forest fruits, hauling produce to the market, or even taking a short-cut through the fields are fraught with danger. Too many children have lost their lives and limbs chasing a stray soccer ball into a mine field.

The United States and Norway have long worked together to remove and destroy landmines and unexploded ordnance. This partnership has saved thousands of lives and helped rebuild post-conflict communities around the world. 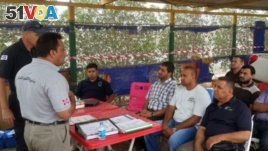 In February, the two countries founded the Global Demining Initiative for Colombia, a program to help Colombia rid itself of explosive remnants of war left over from more than five decades of conflict, which has ended with a peace agreement announced August 24. Since then, 22 countries plus the European Union have committed to the Initiative. And in late July, the two partner countries created the U.S.-Norwegian Demining Initiative, which will support mine clearance in Syrian and Iraqi areas that have been liberated from ISIL.

“While more government-to-government cooperation is important, we need all the help we can get to address the challenges of landmines and unexploded ordnance,” wrote Rose Gottemoeller, Under Secretary of State for Arms Control and International Security in a recent blog post.

The Colombia initiative has shown the importance of engaging many partners, including governments, NGOs, civil society, and the private sector in the demining effort. Regional public-private partnerships can generate fresh ideas, find new ways to help safely clear unexploded ordnance in post-conflict countries.

“International support, not only from governments, is essential to saving lives and preventing injuries in the aftermath of war,” wrote Under Secretary Gottemoeller. “Nations and civil society, including businesses, can work together to ensure that all people are able to walk the earth in safety.”