Update Required To play the media you will need to either update your browser to a recent version or update your Flash plugin.
By VOA
Sep 28, 2017


Disinformation is as old as the human race, and has been used as a weapon since time immemorial. With the advent of the digital age came the capability to rapidly disseminate information—and disinformation--across the globe.

“Today we are encountering a global explosion of disinformation, propaganda and lies fed by multiple authoritarian regimes and non-state actors like ISIS,” said John Lansing, Chief Executive Officer and Director of the Broadcasting Board of Governors, or BBG, a United States government agency that is tasked with countering disinformation by setting the record straight through accurate, factual journalism. 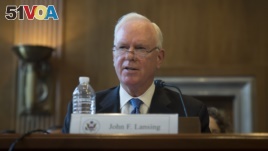 Speaking before the Helsinki Commission, Mr. Lansing noted that Russia is one of the worst offenders.

“In Russia, the Kremlin propaganda machine is breathing new life into a strategy of dezinformatsiya, or disinformation, operations to influence opinions about the United States and its allies and partners. Essentially, it's the weaponization of information,”

Russian disinformation campaigns do not attempt to sway listeners to the Russian point of view, as they had during the Cold War. Instead, “the Russian strategy is to destroy the very idea of an objective, verifiable set of facts. In their world the death of facts is the first step towards creating the alternative reality that helps them gain and keep authority with no accountability. If everything is a lie, then the biggest liar wins,” said Mr. Lansing.

The best way to counter disinformation is to exposes the lies, and to deliver uncensored, trustworthy information to audiences across the globe. For that reason, the BBG operates five networks: the Voice of America, Radio and TV Marti, Radio Free Asia, Radio Free Europe/Radio Liberty, and the Middle East Broadcasting Networks, including Alhurra TV and Radio Sawa. They disseminate information across all platforms, from traditional radio and television to digital, mobile and social networks.

“The BBG's mission is to inform, engage, and connect people around the world in support of freedom and democracy,” said Director Lansing.“Collectively, our programs reach 278 million people on a weekly basis in more than 100 countries and 61 languages. The BBG provides consistently accurate and compelling journalism that opens minds and stimulates debate. We demonstrate values that reflect our society: freedom, openness, democracy and hope.”