Update Required To play the media you will need to either update your browser to a recent version or update your Flash plugin.
By VOA
Jul 31, 2017


Home-made bombs, known as Improvised Explosive Devices, or IEDs, are used by terrorists not only to attack opposition military forces, but also increasingly to harm civilian populations. As a world leader in clearing explosive hazards that threaten civilians, the United States is taking action to tackle these deadly devices in Iraq, Syria, Colombia, Afghanistan and elsewhere around the world.

According to the Landmine Monitor, an annual report by a non-governmental organization, “person-activated IEDs and improvised landmines caused 1,075 casualties in 2014 and 1,331 casualties in 2015. 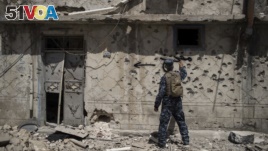 Graffiti warns that this wall is booby-trapped with IEDs. Mosul, 2017. (AP images)

IEDs are a particular threat to both military personnel and civilians as they enter areas previously occupied by terrorists. For example, during the final months of the battle for Mosul, ISIS sowed the city streets with IEDs to prevent civilians from leaving. Later, as they retreated from the city, the terrorists set thousands of IEDs around critical infrastructure like power and water utilities, schools, and hospitals.

“Non-state armed groups such as ISIS and the Taliban often use IEDs to destabilize peace operations and terrorize civilian populations in Iraq, Afghanistan, and Syria,” writes Stephanie Pico, a Public Diplomacy Officer at the U.S. Department of State.

“ISIS also has deliberately placed IEDs before retreating from an area with the intent of prolonging insecurity, inflicting additional casualties on communities struggling to recover, and delaying economic redevelopment in liberated communities long after direct ISIS-instigated hostilities in those areas cease.”

The United States is the world leader in conventional weapons destruction, including humanitarian demining, having invested over 2.8 billion dollars in projects in more than 100 countries since 1993.

In addition to humanitarian demining the United States Counter-IED efforts work to disrupt networks that use IEDs, and train the forces fighting those networks to identify IEDs and protect against them.

“Counter-IED differs from humanitarian demining in that it focuses on deterring, detecting, and preventing IED employment before threats become imminent,” writes Stephanie Pico.

Working with our allies and the international community, she writes, the United States will continue to develop strategies to address the IED threat to prevent IED users from carrying out their nefarious plans and achieve peace and security.