Update Required To play the media you will need to either update your browser to a recent version or update your Flash plugin.
By VOA
Aug 31, 2016


The terrorist group Boko Haram has exacted a heavy toll on the people of Nigeria. The group has killed more than 20,000 people, displaced more than 2 million, and plunged some 7 million Nigerians into hunger and desperate need. In the past two years Boko Haram has used more than 100 women and girls to carry out attacks.

Speaking in Nigeria, U.S. Secretary of State John Kerry said, “No one anywhere. . .should have to live among this evil. . . .But it isn't going to disappear on its own.” In recent months, there has been progress on the battlefield against Boko Haram. Over the last six months, the Nigerian army has rescued thousands of civilian hostages and hundreds of Boko Haram fighters have surrendered to the Nigerian army.

But beating Boko Haram on the battlefield is only the beginning of what needs to be done, said Secretary Kerry. To effectively counter violent extremism, military action needs to be coupled with a commitment to values like good governance, education, security, and respect for human rights. 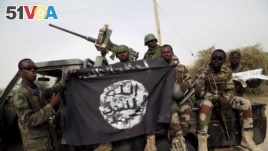 FILE PHOTO - Nigerian soldiers hold up a Boko Haram flag that they had seized in the recently retaken town of Damasak, Nigeria.

The fight against corruption has to be a priority of the first order, said Secretary Kerry. There is nothing more demoralizing to citizens than the belief that the system is rigged against them. The most basic duty the government has is to meet the needs of its people and to be accountable.

Governments must also provide opportunity for all, giving women and girls an equal chance to compete in the classroom and in the workplace.

Finally, the government needs to promote compassion and understanding for fellow citizens. Breaking the terrorist cycle of violence requires treating those who escape or defect from Boko Haram, and particularly those who were abducted against their will, with sensitivity as they try to return to their old communities. Welcoming these individuals – especially women and girls – back into society without the threat of violence or discrimination – and ensuring that the millions who have been displaced in Nigeria and throughout the region get the humanitarian and government support that they desperately need.

“This,” said Secretary Kerry, “is the way you invest in a future that is free from violence and provides. . .the stability and the peace that [Nigerians] so desperately want.”