Update Required To play the media you will need to either update your browser to a recent version or update your Flash plugin.
By VOA
Dec 3, 2017


Critically-needed supplies, including food and medicine, have arrived in Yemen, after Saudi Arabia and the Saudi-led coalition eased the three-week military blockade they had imposed on Yemeni ports and Sanaa International Airport. The blockade began November 6 after Houthi rebels launched another missile strike into Saudi Arabia, this time near the airport in Riyadh.

The Yemeni people are suffering a humanitarian disaster as the conflict in the country rages on. It began in 2015 when Houthi rebels, supported by Iran, seized the capital of Sanaa and drove the internationally recognized government into exile. At the request of the Yemeni Government, a coalition led by the Kingdom of Saudi Arabia, began airstrikes on rebel positions to halt their southward expansion. 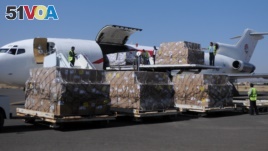 Now more than 10,000 civilians have been killed, millions displaced, and at least 21 million are in need of humanitarian aid, including medicine required to curb outbreaks of cholera, diphtheria and other diseases. U.N. spokesman Stephane Dujarric warned recently that 7 million Yemenis are currently in danger of famine.

The White House praised the easing of the blockade by Saudi Arabia and the Saudi-led coalition, calling it “the first step in ensuring that food, medicine and fuel reach the Yemini people and that aid organizations on the frontline of mitigating this humanitarian crisis are able to do their essential work. We look forward to additional steps that will facilitate the unfettered flow of humanitarian and commercial goods from all ports of entry to the points of need.”

She noted that the Houthi rebels backed by the IRGC, as it is called, “have used destabilizing missiles to target Saudi Arabia – systems not present in Yemen before the conflict.” The international community, she stressed, “must take the necessary steps to hold the Iranian regime accountable for its repeated violations of UN Security Council Resolutions 2216 and 2231, as the [IRGC] exploits the grave humanitarian crisis in Yemen to advance its regional ambitions.

“Millions of Yemenis are currently enduring severe deprivation,” Ms. Sanders wrote. “The United States continues to believe that this devastating conflict, and the suffering it causes, must be brought to an end through political negotiations.”