Update Required To play the media you will need to either update your browser to a recent version or update your Flash plugin.
By VOA
May 30, 2018


The Darknet is a part of the Internet that is not easily searchable, and requires specific software, configurations or authorization for access. Entire websites can be set up on the Darknet, whose contents, as well as all connections made to the websites, are encrypted, allowing users to operate and access the sites anonymously.

“Exploitation of the Darknet by transnational organized crime is a growing phenomenon and is a serious threat to all our national and economic securities,” said Deputy Assistant Secretary for International Narcotics and Law Enforcement Affairs James Walsh. 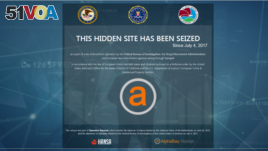 AlphaBay was created by Alexandre Cazes, who lived in Thailand.The site went offline on July 4.

Indeed, criminals use the Darknet to facilitate child sex exploitation and to engage in illegal sales of stolen identity information, guns, toxic chemicals, explosives, and of course, illegal drugs.

“Notably, the Darknet has created a new drug trafficking paradigm allowing users to order and receive products like fentanyl through the mail. This means they bypass traditional drug trafficking routes and organizations. Payment is often made through cryptocurrencies that can further protect anonymity,” said James Walsh.

Obviously, there is a pressing need to address this criminal activity. But by their very nature, criminal marketplaces hosted on the Darknet are extremely challenging to locate, and their users to identify, meaning that skilled law enforcement and extensive multilateral cooperation are needed for any successful investigation.

In a powerful step to curb illicit activity on the Darknet, last year, U.S. and Dutch law enforcement led the coordinated shut down of two of the top-five darknet marketplaces, AlphaBay and Hansa Markets, in an coordinated, international operation by seven countries and EUROPOL.

“The more countries taking action on cybercrime, and working together, the more effective we will be. It is important that we prevent the creation of safe havens that can be exploited by criminals, whereever they be,” he said.

“We also urge continued focus on technical assistance building. For our part, the United States is ramping up our foreign assistance programs to help developing nations build their capacity to pursue Darknet criminals.”