Update Required To play the media you will need to either update your browser to a recent version or update your Flash plugin.
By VOA
May 31, 2017


From time to time, the United States identifies certain individuals as crucial to the operation of terrorist organizations. In all cases, these are people who have committed, or are deemed to pose a significant risk of committing, acts of terrorism.

When such an individual is identified, the U.S. government places that person's name on the Specially Designated Nationals List. His assets within U.S. reach are immediately frozen, and he is locked out of the global financial network. No U.S. citizen or company may conduct business with a designated individual. 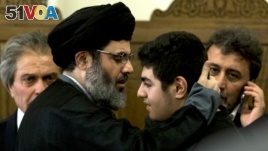 On May 19th, Hashem Safieddine and Muhammad al-Isawi were named as Specially Designated Global Terrorists by the U.S. Department of State, under Executive Order 13224. Concurrently, the Kingdom of Saudi Arabia designated Safieddine under its Law of Terrorism Crimes and Financing, and Royal Decree A/44.

Hashem Safieddine is a top leader of Hezbollah, an Iran-supported Foreign Terrorist Organization and Specially Designated Global Terrorist entity that has been responsible for dozens of major terror attacks over the past four decades. Saffieddine is a key member of Hezbollah's executive council, which oversees Hezbollah's political, organizational, social, and educational activities.

Muhammad al-Isawi is a leader of the Sinai affiliate of ISIS. Better known as Abu Usama al-Masri, he was this terrorist group's media spokesman and assumed the leadership position after the August 2016 death of Abu Du'a al-Ansari. The group he leads today, once known as Ansar Bayt al-Maqdis, was designated as a foreign terrorist group in 2014. This designation was updated a year later, to reflect the group's affiliation with ISIS.

The designations of Hashem Safieddine and Muhammad al-Isawi serve to notify the U.S. public, as well as the international community, that these two men pose a serious risk of committing acts of terrorism. At the same time, the action against Safieddine is the latest example of the strong partnership between the United States and Saudi Arabia in combatting the financing of terrorism.

The Safieddine designation is also consistent with the U.S. government's ongoing effort to expose and apply pressure against the actions of Hezbollah, which is supported by the foremost state sponsor of terrorism, Iran.