Update Required To play the media you will need to either update your browser to a recent version or update your Flash plugin.
By VOA
Feb 20, 2018


The United States is committed to supporting Afghanistan's government in its efforts to achieve peace, security, and prosperity for their country. As part of this support, we are working to undermine the Taliban and the Haqqani network terrorist organizations.

One of the best ways to hinder any terrorist group's activities is to disrupt the activities of its high-level operatives. To this end, the U.S. Treasury Department's Office of Foreign Assets Control, or OFAC, designated under Executive Order 13224, four members of the Taliban and two from the Haqqani network. 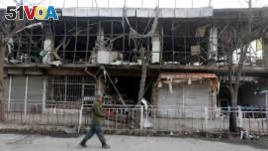 Abdul Samad Sani is involved in financing the Taliban, and procuring supplies for them. In recent years, he has on numerous occasions raised or collected funds for the Taliban, purchased supplies and ammunition for Taliban commanders and fighters engaged in combat in Afghanistan, and appointed special representatives to serve as Taliban fundraisers abroad.

Abdul Qadeer Basir Abdul Baseer, a member of the Taliban Finance Commission, has provided Taliban commanders with tens of thousands of dollars to fund their operations, and disbursed funds directly to Taliban shadow governors.

Hafiz Mohammed Popalzai is one of four individuals responsible for all Taliban financing, including foreign financing and money from the narcotics trade. He also invests the Taliban's money.

Maulawi Inayatullah has operated as the overall Taliban member responsible for attacks against Afghan and Coalition Forces in Kabul, and provided financial support and other materials for the attack planners.

Faqir Muhammad has for many years been a major fundraiser for the Haqqani Network.

“We are targeting six individuals related to the Taliban or Haqqani Network who have been involved in attacks on Coalition troops, smuggling of individuals, or financing these terrorist groups,” said Sigal Mandelker, Under Secretary for Terrorism and Financial Intelligence. “This action supports the President's South Asia Strategy by disrupting these terrorist organizations and publically exposing individuals who facilitate their activities. The Pakistani government must work with us to deny the Taliban and the Haqqani Network sanctuary and to aggressively target their terrorist fundraising.”