African Diaspora Advocates for More African Refugees in US

Update Required To play the media you will need to either update your browser to a recent version or update your Flash plugin.
Elizabeth Lee
December 03,2015


LOS ANGELES— The United States says it will significantly increase the numbers of refugees it accepts from around the world over the next couple of years. While the recent focus has been on Syrian refugees, members of the U.S. African diaspora hope African refugees will also benefit from the pledge. However, there is one hurdle that keeps Africans in the U.S. from speaking as one voice.

On the edge of downtown Los Angeles, a group of people, mainly from the Democratic Republic of Congo, gather at the African First Community Church of Southern California once a week for a little piece of home. About one-third of them arrived in the U.S. as refugees. Camille Ntoto, founder of Africa New Day, said applying to the U.S. under refugee status is not an easy process.

“Sometimes it’s very difficult. It’s a very long process and we never know when you start the process when it’s going to actually end up being -- the person actually coming to the States, said Ntoto. 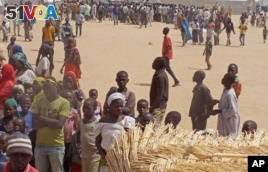 FILE - People who fled their homes due to violence from the Islamic extremists group Boko Haram are seen inside a refugee camp in Minawao, Cameroon, Feb. 25, 2015.

On this Sunday, Ntoto talks to the congregation about the work he’s been doing to help the Congolese people back home -- in a country plagued by war and violence.

”The whole country is in, the whole continent I wanted to say, is in big turmoil, so when we are seeing Africans really running for their lives, I don’t know why many times the international community closes its eye,” said Kasomo.

Ethiopian native Saba Maskel has been a persistent voice for African refugees. “The victims are those who are regular people. They can’t work in their country. They have been jailed. They have been tortured,” said Maskel.

Maskel has been helping refugees navigate life in the U.S. for almost 35 years.

In 2015, about one-third of all refugees who have arrived in the U.S. have come from Africa.

Talk show host and magazine editor Pamela Anchang, who's originally from Cameroon, hopes more Africans will be able to come as the U.S. increases the numbers of accepted refugees over the next few years.

“People are getting killed, getting slaughtered, even in my own country, [in] the north, Boko Haram has infiltrated and has caused a lot of havoc, but it just seems to be that the emphasis is more on the European crisis, and the Africans are feeling neglected, so I think we as Africans ought to speak up,” said Anchang.

Anchang hopes the plight of African refugees will get more attention through her TV shows and a magazine about immigrants and the African diaspora.

But she said it is not easy for the African diaspora to speak as one voice.

“Africans are very tribal in their thinking. We’re very regional in our thinking, so we’ve been so divided and conquered back home, so Africans typically don’t see themselves in a homogenous way,” said Anchang.

Anchang said that in the U.S., it is best to work with one voice: the voice of an African.