Update Required To play the media you will need to either update your browser to a recent version or update your Flash plugin.
Joe DeCapua
March 12,2015


It’s estimated about 27 million people are displaced every year by natural disasters. A new report says the problem will get worse with more frequent extreme weather events – and development in hazard-prone areas.

“That is the dimension of the problem – how disaster is displacing people more and more – is a huge problem and it has to be addressed,” he said. 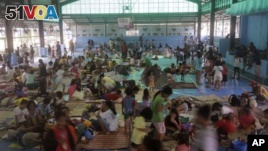 FILE - Residents rest in an evacuation center at suburban Quezon city northeast of Manila, Philippines after fleeing their homes in anticipation of typhoon Hagupit, Dec. 9, 2014.

The center has released a new report called Disaster-related Displacement Risk: measuring the risk and addressing its drivers. The report was released in the run-up to the 3rd U.N. World Conference on Disaster Risk Reduction. The summit is being held in Sendai, Japan from March 14 through the 18.

“The main risk drivers for this development has been population growth in hazard-prone areas – the rapid and unplanned urbanization – the unequal distribution of wealth. Also, it has to be said, in certain areas, weak governance and state failure,” he said.

The report said Asian countries have the highest risk of displacement because people are exposed to “multiple natural hazards.” These include – what are called – mega-events that affect many people.

“Mega-events are more than three million people per event. And those are increasing in number and they are affecting most people in Asia,” he said.

Zamudio said these include the giant typhoons that have hit the Philippines in recent years.

“People in a country like the Philippines and other areas of Asia -- who are living where urbanization is growing very fast – where they are living in very poor conditions in hazard-prone areas, like to say a river bed or a beach, closer to where the big waves may come --those people will be affected very, very hard more and more and more frequently unless something is done very quickly with their situation.”

Small island states – such as Antigua and Barbuda, Haiti and Cuba – are also among high-risk countries.

The report also said 30 percent of the pastoralists in northern Kenya, southern Ethiopia and south-central Somalia are at risk of being “permanently displaced by 2040.” That can happen, it said, even if “climate change does not make droughts more frequent or severe.”

Zamudio said, “The risk for displacement has three components: hazard, how people are affected by it and the vulnerability of people. So climate change affects one of them – affects the hazard -- the frequency of the hazard and the strength of the hazard.”

He added that conflict and violence further increase the vulnerability of communities.

The Internal Displacement Monitoring Center recommended: adoption and enforcement of land-use plans and stronger building codes; and diversifying and strengthening the livelihoods of the poor. It said the global community must address disaster risk and sustainable development simultaneously, including efforts to end conflicts.