Update Required To play the media you will need to either update your browser to a recent version or update your Flash plugin.
Joe DeCapua
December 19,2014


The U.N. refugee agency says weekly massacres of civilians are being reported in the DRC’S North Kivu Province. It says armed groups have been attacking since October, bringing fear, death and displacement.

The UNHCR says armed groups are striking in and around Beni – and the violence is now spreading north to Orientale Province.

Agency spokesperson Karin de Gruijl said, “We received very credible reports of ongoing killing of civilians. About 256 people, including children, have been killed in a very gruesome manner with machetes and axes.”

Just which groups are responsible for the attacks is not clear. 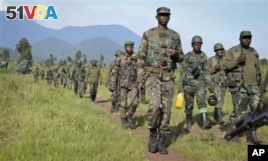 “Well, it is very difficult to tell at this moment. We understand that there are several groups and remnants of groups -- that there [are] shifting militias and armed elements that are roaming the area and preying on the civilians. We don’t have information that it’s one particular group, but there is an overall problem of lawlessness,” she said.

The violence has caused widespread displacement. The UNHCR spokesperson describes survivors as being in “a desperate situation and living in constant fear.”

“This latest wave of violence has displaced an estimated 88,000 people. They’re trying to get to the larger towns and cities in North Kivu. We’re talking about the north of North Kivu. And we also know that some of the violence has spread further northward into Province Orientale. So people are living, squatting in churches, school buildings. But the area itself is already quite poor, very few services. Many of the aid projects that were ongoing had to be suspended because of the insecurity,” she said.

Many of the places do not have drinkable water. Food and medicine are in limited supplies. That’s expected to worsen because humanitarian workers are not able to reach those who’ve been displaced. These also are places where malaria, typhoid, malnutrition and diarrhea are common due to contaminated water.

The UNHCR is calling on the DRC government and the U.N. peacekeeping mission – MONUSCO – to ensure safe access for humanitarian agencies and protection of civilians.