Update Required To play the media you will need to either update your browser to a recent version or update your Flash plugin.
Joe DeCapua
March 20,2015


East Coast fever kills one cow every 30 seconds in Africa, causing $300 million in annual losses. But a new discovery could lead to an effective and much cheaper way to prevent the disease by pitting one form of parasite against another.

Philip Toye said, “East Coast fever is a major burden for millions of poor people in Africa whose existence depends on healthy cattle.”

He said, “It’s restricted to east, central and southern Africa. And in those countries it’s the most important constraint to livestock productivity. It affects particularly the better breeds of cattle. It’s a lethal disease. It can kill up to 90-95 percent of a susceptible herd. And death usually occurs in about two to three weeks.”

Toye, a principle scientist at ILRI, the Nairobi-based International Livestock Research Institute, said the parasitic disease is spread by ticks and has “devastating consequences if not controlled.”

He said, “The means of control at the moment – pesticides – just to reduce the tick burden – is expensive and it requires continual application. And, of course, there are also environmental effects there.”

Currently, cattle can be inoculated against East Coast fever. It’s been shown to reduce calf mortality in some areas from about 50 percent to less than three percent.

Toye said,”There is a vaccine available, which involves inoculating essentially the live parasite, but at the same time giving a long-acting antibiotic, which means the animal experiences the infection, but not the disease to any great extent. But they do develop a very strong immunity to the disease. So, it’s a very effective vaccine. It’s very safe when administered correctly, but it’s complex to produce and it is expensive.”

Toye explained just how complex the vaccine’s manufacturing process is. 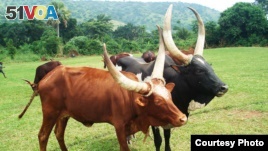 “Experimental cattle are actually infected with the parasite. The ticks are applied to the cattle. And then the ticks are recovered and they’re ground up and then they’re stored in liquid nitrogen. So it takes about a hundred cattle, 600,000 ticks and also rabbits, which are used to mature the parasite before its ground up. So, those costs are quite expensive. And it can take up to 12 to 18 months to produce a batch because once it’s made it then has to be tested to ascertain the potency of the vaccine,” he said.

A batch can range from a half million to one million doses.

The potential new prevention method is based on a study of co-infections done in Western Kenya.

Toye said, “Up until relatively recently, most research was done looking at micro organisms in isolation. So, one would look at the effects of a particular bacterium or a particular virus or a particular parasite. But it’s more lately been recognized that that’s actually not what happens in reality – that people and animals get several different microorganisms at the same time. What is the effect of having two, three or four different microorganisms? What is the effect of one on the other? Does it make the consequences of that infection more deleterious or is it beneficial?”

They discovered that the co-existence of parasites in calves appears to be a good thing in the East Coast fever zone.

“The most important pathogen out in that area is Theileria parva, which causes East Coast Fever. If calves were infected at the same time as they got Theileria parva with a related organism called Theileria mutans or Theileria valifera – these so-called low pathogenic Theileria – then the odds of their dying of East Coast fever was significantly reduced. And that’s the basis of the paper, which is being published,” he said.

The findings appear in the journal Science Advances. Toye was asked if he knows why the co-infection greatly reduces the chances of cattle dying of East Coast fever.

“No. That’s a key question. We don’t know if it’s helping to remove that infection – or is it simply decreasing the effects of the disease that’s caused by the infection. But if we could discover that then it may open up lots of possibilities as to how to control these diseases.”

The next step could involve intentionally infecting calves with the less harmful parasites to determine if they can then resist East Coast fever. If so, it could lead to a cheaper, easier-to- make vaccine.

Some speculate the findings could be applied to other parasitic diseases, including malaria. Two parasites cause malaria, but one – Plasmodium falciparum – is much more deadly than the other –Plasmodium vivax. A 1996 study suggests that people in the South Pacific, who have a genetic mutation making them susceptible to the less deadly parasite, may be protected against Plasmodium falciparum.