Update Required To play the media you will need to either update your browser to a recent version or update your Flash plugin.
Joe DeCapua
February 06,2015


The International Monetary Fund has announced a 330 million dollar financing package for the countries hardest hit by the Ebola epidemic. It includes 170 million dollars in debt relief. The economies of Guinea, Liberia and Sierra Leone have suffered over the past year as the disease has spread.

Under the plan, $100 million in relief would come directly from the IMF, while $70 million would come in the form of debt forgiveness by IMF member nations.

Jubilee USA Network Executive Director Eric LeCompte, said, “We’re incredibly excited about it and we had been working on this plan for quite some time. Initially, we brought the idea to the White House for a hundred million dollars in debt relief – and to use an existing trust at the IMF to do that. They then brought it to the G20. The G20 then affirmed it and said we want at least a $300 million financing plan – and instructed the International Monetary Fund to create a financing plan that included debt relief, grants and loans.”

Jubilee is a faith-based anti-poverty organization. 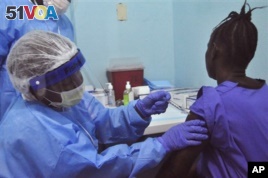 A woman is injected by a health care worker, left, as she takes part in an Ebola virus vaccine trial, at one of the largest hospital's Redemption hospital in Monrovia, Liberia, Monday, Feb. 2, 2015. A large-scale human trial of two potential Ebola vaccines got under way in Liberia's capital , part of a global effort to prevent a repeat of the epidemic that has now claimed over 9,000 lives in West Africa. (AP Photo/ Abbas Dulleh)

“Essentially, by international law debt relief has to go into building infrastructure. So it’ll be building hospitals, health care facilities and schools in the three countries. This type of aid is aid that becomes immediately available. And the countries, instead of making debt payments, now put that money into building social infrastructure,” he said.

LeCompte would like to see an even broader relief for Guinea, Liberia and Sierra Leone.

The debt relief coming directly from the IMF is being done through the new Catastrophe Containment and Relief Window Trust.

He said, “What took place at the International Monetary Fund is they took a previous mechanism that was used to cancel the debt from Haiti in 2010 and they expanded that. And what this facility is able to do is when a very poor country – the poorest countries of the world – have an earthquake, a hurricane, any kind of major tragedy or health epidemic – they would qualify for either debt relief or innovative financing from grant-like monies provided from the International Monetary Fund.”

LeCompte said the trust could greatly change how debt relief is given.

“Right now, when any country is struggling or has a challenge, they need to go on their hands and knees to the International Monetary Fund or the Paris Club and beg for debt forgiveness. And it’s a very challenging process, but what we have right now is much more responsible. It will only impact essentially the 20 poorest countries in the world when they have an economic shock, like an epidemic or a hurricane, they have a place to go to for aid and relief.”

The Paris Club, created in 1956, is a group of creditors that provides debt reduction or payment postponement to some countries.

The Jubilee USA Network executive director spoke to VOA from the United Nations headquarters in New York. He addressed the General Assembly February 5th on debt, which he says is the main reason for global financial crises.

“The General Assembly of the United Nations has voted to create a legally binding, international bankruptcy process. And this week in New York is the first week of negotiations on creating that process. And I was asked to address all the delegates to talk about how this process can move forward -- what’s necessary for the process,” he said.

The IMF plan will not eliminate all the debt for Guinea, Liberia and Sierra Leone. The countries are reported to have a “combined debt stock of over three billion dollars.” That’s blamed on past dictatorships, civil wars and one party rule.