Update Required To play the media you will need to either update your browser to a recent version or update your Flash plugin.
Joe DeCapua
January 20,2015


The World Bank estimates Guinea, Liberia and Sierra Leone will lose more than $1.5 billion this year in economic growth due to Ebola. However, the economic effect on the West Africa region overall is now expected to be much lower than previous forecasts.

World Bank Senior Economist Dave Evans, co-author of the latest report on Ebola’s economic consequences, said the three worst affected countries have seen their economies contract. Prior to the outbreak, good economic growth had been expected.

“Essentially, the economic slowdown has been profound. This is a huge change for these economies and a real challenge,” he said. 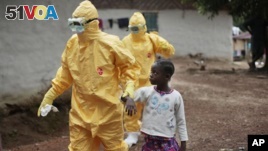 FILE - Nowa Paye, 9, is taken to an ambulance after showing signs of the Ebola infection in the village of Freeman Reserve, about 30 miles north of Monrovia, Liberia, Sept. 30, 2014.

When determining the economic impact of Ebola, the World Bank studies how people react to the disease.

“With the economic impact of Ebola it really comes through these reactions based on fear – or what we often call aversion behavior – people taking decisions to avoid any exposure to the disease," he said. "One of the challenges with that is that even as the disease starts to get under control and we have fewer cases, it doesn’t necessarily mean that investors immediately start making new plans to open new mines or set up new factories. The effects can be quite enduring.”

He said that phone surveys show that despite a decline in the number of new Ebola cases, job losses remain high and food insecurity persists.

Evans said there are previous examples of the effects of fear on behavior.

“I think it’s most reminiscent of what we saw with SARS and in the early days of AIDS where there was a lot of uncertainty about exactly how people could be exposed," he said. "And as a result, people take sometimes extreme reactions to avoid any interaction with these economies.”

In October, the World Bank estimated the West Africa region could suffer up to $25 billion in losses in 2015. But that estimate is now sharply lower.

Evans said, “What we’ve done is we’ve spoken to our economists in every country around sub-Saharan Africa. What we observe now is that the actual impact we’re seeing for all of Africa – not just West Africa – is more on the order of $500 million – very, very small -- even if we look at a bad case scenario. So, a scenario where the epidemic does spread more in the region we’re looking at about $6.2 billion for all of Africa. So that’s much, much smaller than the $25 billion we were talking about for just West Africa alone.”

The senior economist said the revised forecast is due to – what the bank calls -- “intensive global and national responses to the epidemic over the past several months.”

“The disease,” he said, “has been controlled significantly within the countries. So, Liberia, Sierra Leone and Guinea have taken lots of action to improve safe burials, improve treatments, change behavior -- where people are careful to avoid exposure. And at the same time, neighboring countries have taken strong action to protect themselves. And we see this in Nigeria, Senegal and Mali.”

Nigeria, Senegal and Mali did have a small number of Ebola cases, but all three have been declared Ebola-free.

Evans cautioned, however, that until the number of Ebola cases reaches zero, there is always a chance that the epidemic could grow much worse again.