Update Required To play the media you will need to either update your browser to a recent version or update your Flash plugin.
Joe DeCapua
January 02,2015


The West Africa Ebola outbreak began just over a year ago in Guinea, but health officials still cannot say when it will be contained. The International Federation of the Red Cross and Red Crescent Societies says while progress has been made, much more needs to be done to prevent a relapse. More than 20-thousand cases has been reported and nearly eight-thousand deaths.

The Red Cross’ Katherine Mueller gives an assessment of the Ebola epidemic in Guinea, Liberia and Sierra Leone.

“The Ebola outbreak is not under control yet. We do see some leveling off of cases for Liberia, for example. However, we’ve seen it before that somebody attends a funeral. They come back. They’re infected. They infect their village and cases spike. So it really doesn’t take much to have another increase in cases,” she said. 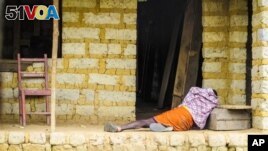 In this Tuesday, Oct. 21, 2014 file photo, a man suffering from the Ebola virus lies on the floor outside a house in Port Loko Community, situated on the outskirts of Freetown, in Sierra Leone. (AP Photo/Michael Duff, File)

Mueller is the IFRC’s Africa communications manager. She worries that people may become complacent after hearing that the number of new cases has slowed in some places.

“That’s actually one of the things we’re concerned about is once people in the country start seeing this leveling off of cases that they’re figuring, yeah, we’re beating this thing and it’s too early to say that. This is the new normal of living with Ebola -- that it’s just not going to go away,” she said.

Part of the organization’s efforts include going to remote areas in the three hardest hit countries.

“So far, our volunteers have reached almost three-and-a-half -million people with their messages about how to protect themselves and how to stop the spread. We’re having some success, but we’re also finding that still a lot of those messages are not being heard. So we really need to figure out how to talk to these communities in a way that they all understand and actually implement the messaging. Talking with the religious leaders, the community leaders – people who are really well-respected – traditional healers – and getting the messages shared by them,” she said.

Mueller said that some of the major obstacles to raising awareness are fear and mistrust, both of the governments and some Westerners.

“A lot of them have never seen white people before. So white people came in when Ebola came in. And communities are connecting the two and in a lot of cases are blaming the Western aid workers, who are there, for bringing Ebola into their communities. So those are some of the challenges that we’re up against,” she said.

And there are also logistical challenges.

“We definitely do not have enough beds to be able to support all the people who would need them. What we’re also noticing, though, is that there’s this geographical spread of the virus. So, we go in and we set up a treatment center in Kenema, Sierra Leone, for example, and then the virus has spread to other remote communities. And that actually makes it harder to manage because if we move the resources from one area to another, cases start spiking in that original area,” said Mueller.

The International Federation of the Red Cross and Red Crescent Societies is asking its partners to expand their operations in the rural areas.

Mueller said that amid the crisis, there are success stories.

“People are surviving this disease. At our treatment center in Kenema in Sierra Leone, we’ve had more than 200 people discharged from the treatment center. Now, not all of them have been confirmed Ebola patients, but a good majority have been. We’ve also had local nurses who have survived. And they’re now actually coming back and joining the Red Cross and they’re volunteering at the treatment center to look after the children, who can’t be together with their parents, who are also at the center.”

The main goal is to reach zero Ebola cases in West Africa. However, she said, it’s important to start talking about investing in African health systems, training medical personnel and greatly improving access to health care.

The IFRC has called a meeting for the end of January to begin planning long-term operations in Guinea, Liberia and Sierra Leone.