Update Required To play the media you will need to either update your browser to a recent version or update your Flash plugin.
Joe DeCapua
July 03,2015


As Liberia rebuilds a healthcare system severely damaged by the Ebola outbreak, researchers said the nation must provide better medical services in remote rural areas. A report examining barriers to health care has been published in the online Journal of Global Health.

Liberia was declared Ebola-free on May 9th. But several new cases of late show just how tenuous that label can be. The first new case since May 9th was a 17-year-old boy, who died the last weekend in June.

John Kraemer has studied how Liberia dealt with the epidemic. He said that while health officials are acting quickly, the fact that new infections were found is heartbreaking. 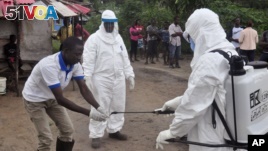 Health workers wash their hands after taking a blood specimen from a child to test for the Ebola virus in an area where a 17-year- old boy died from the virus on the outskirts of Monrovia, Liberia, June 30, 2015.

“The last time I was in Liberia was in February. The cases were essentially gone. And there was this sort of palpable optimism everyplace. And so it's really disheartening to see these cases back. It does appear that the ministry and their partners are on top of things, which is at least optimistic. Certainly, the system is fragile. What these cases indicate is hard to know, but it’s concerning that the young man who died doesn’t appear to have been on anybody’s list of contacts.”

The Liberian teenager reportedly had been identified as having malaria, not Ebola.

Kraemer is an associate professor of health systems administration at Georgetown University. He’s also a technical consultant to the organization Last Mile Health, which focuses on rural healthcare.

“Before Ebola, Liberia was coming out of the war, which ended in 2003, and health indicators were really turning around. And so the progress that you saw in things like under-five mortality or maternal health indicators was really impressive, given how little money there is in the system; given how few physicians of other health care providers were in the country. Ebola, to some extent, just decimated that system,” he said.

He said it’s too soon to tell what the long-term impact of the Ebola epidemic will be on Liberia’s healthcare system. But he said with the loss of many health workers to Ebola also came a loss of trust in the system.

Medical care is more available in urban areas than rural. So Kraemer and Last Mile Health looked at how the rural population copes.

“This is a population that’s as disadvantaged as any place on the planet. And so we really wanted to understand what particular barriers this population faces in order to be able to deliver services as well as possible,” he said.

Kraemer said the main finding of the research is not surprising.

“Of course, as you get farther away from health facilities, access to care declines. And it declines fairly drastically. So, for example, one that measure we use is what we call the full maternal health cascade, which is at least four antenatal care visits, facility-based delivery and postnatal care for the mother and child. And when we look at this measure among people who live in the most distant parts, the most remote parts of this rural population, only about seven percent or so receive that full cascade.”

He said, “The same thing is true for childhood illnesses. If you looked at fever treatment, we saw about nine percent of kids in the most distant group getting care for fever, potential malaria, compared to 43 percent in the nearest, but still rural, group.”

But Kraemer said no matter what the distance, parents want their children to receive care for illnesses.

“If you sort of step back a level and you ask parents: when your child had fever – when your child had acute respiratory illness, potential pneumonia – did they receive care from anybody? Distance didn’t matter in the answer to that question. And that’s also, of course, not surprising, right? So parents want their kids to be treated and parents would seek care from somebody no matter where they were. But parents who lived in the most rural parts of this rural area would be much more likely to get their kids treated by a traditional provider, by these providers called black baggers, which are sort of roving medical dispensaries,” he said.

He said the quality of care could be much lower in such cases.

“You don’t know what the drugs are. You don’t know if the drugs are expired or ever had active ingredients. You don’t really have diagnostic capabilities. And so the optimistic part of that, I think, is that it suggests that there is real demand for healthcare services that can be met if you can get services out to where people actually live.”

He said with today’s technology groups like Last Mile Health can provide diagnostic and treatment for malaria, acute respiratory infections and severe diarrhea and help with family planning, among other things.

The thing that’s really complicated, but is really, really important, is referral networks. A woman goes into labor. She needs to figure out a way how to get transported to a facility to be able to deliver in that facility. In the U.S. that would be done by an ambulance or a friend would drive the person. Here, you have to become a lot more creative. So it’s thinking about engaging people who already drive from community to community because they’re delivering things. It’s amazing to me that this happens, but finding people who are motor biking small-level supplies, who can literally put a woman in delivery on the back of the motor bike. I’ve never been in labor, but I can’t imagine that’s much fun,” he said.

Kraemer is also a Scholar with the O’Neill Institute for National and Global Health Law at Georgetown University. He says that “international human rights law and ethical norms oblige health ministries and their development partners to promote equal access to essential health services.”