Update Required To play the media you will need to either update your browser to a recent version or update your Flash plugin.
Joe DeCapua
May 15,2015


More than a year after the Ebola epidemic began in West Africa the end appears to be near. Liberia has been declared Ebola-free and Guinea and Sierra Leone have reported just a few cases in recent days. Members of the medical aid group that sounded the alarm about the outbreak have reflected on its effects.

Doctors Without Borders said while the number of recorded Ebola cases “has decreased, much work remains to be done.” It described health systems as being “ravaged,” as hundreds of health care workers died in the outbreak along with about 11,000 others.

Some members of the group – also known as MSF – took part in a panel discussion about how Ebola damaged the lives of both the infected and uninfected. 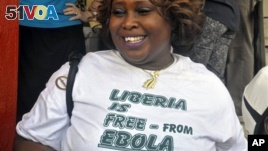 A woman smiles as she celebrates Liberia being an Ebola-free nation in Monrovia, Liberia, Saturday, May 9, 2015. Liberia is now free of Ebola after going 42 days — twice the maximum incubation period for the deadly disease — without any new cases, the World Health Organization announced on Saturday.(AP Photo/ Abbas Dulleh)

Ella Watson-Stryker, a health promoter, said a lot of lessons have been learned. In the beginning, MSF focused on supporting the overall intervention efforts to stop the spread of Ebola. But she said more needed to be done.

“What we didn’t do well in the beginning is broaden our scope to really be able to reach into the communities – not just the communities that were most affected, but also the communities that were not yet affected. And we stayed very much focused in Guinea in Guékédou Prefecture and we didn’t focus on Guinea as a country, as a whole. And it was months before we had a dedicated health promoter based in Conakry even though we had a lot of cases in Conakry throughout that time -even though we had a fully functioning management center,” she said.

Another lesson learned, she said, is just how scary Ebola can be.

“Ebola is a disease that creates fear and everyone’s afraid – whether it’s the leader of a small village, whether it’s the president of a country. The doctors and nurses who respond are afraid. The health promoters, who are there - trained to talk about Ebola - are afraid. And our patients are terrified. And so, I think that’s the biggest barrier that we have to overcome.”

Watson-Stryker said when people are that afraid they may refuse to face reality.

“Something that we learned again and again is that when people are afraid denial becomes a really good fallback for how to deal with that level of fear. And we saw that people were in denial when they were sick. We saw that villages were in denial that anyone in the village had died from Ebola. We saw governments in denial that there was Ebola inside their country and we saw [the] international community deny the severity of the outbreak.”

She said to overcome fear of Ebola health workers must build trust in the community. And that, she said, can take a very long time.

Dr. Craig Spencer worked as both an MSF physician and epidemiologist in Guinea. He said it’s important to celebrate the victories, but never forget what happened.

“I think the biggest challenge is something that we’ve been dealing with in a different form since the epidemic began over a year ago – and that is complacency. Everyone is rightfully excited that Liberia, as of a few days ago, has passed 42 days and is declared Ebola-free. But West Africa, as a region, and really the global community, as a whole, will not be Ebola-free until Guinea, Sierra Leone, Liberia and everywhere else that’s been touched by this virus makes it out of that window,” he said.

Earlier this year, Spencer traveled back to Guékédou in southern Guinea near the Liberia and Sierra Leone borders.

“It was amazing to me just driving back through town for the first time in months how life just kind of got back to normal. There were teenagers on the streets holding hands. Markets were bustling. You wouldn’t know that this is the same place that merely months before Ebola was ravaging and destroying communities,” he said.

Thousands of people survived the outbreak. But Dr. Spencer said its effects linger, including joint pain and vision and hearing problems, as well as post-traumatic stress and stigma.

He said, “It will be great when all of these countries are officially declared free of Ebola. But in many ways the hard work really starts at that point. A transition to a post-Ebola healthcare system is going to be an incredibly difficult and fragile task.”

He said healthcare must include prevention and treatment for a wide range of illnesses, and nutritional support to help the body heal. Spencer added that MSF has learned the importance of psycho-social support to help people get through – what he called – an “unbelievably difficult and trying time.”

MSF-USA Executive-Director Sophie Delaunay said the organization had experience with Ebola in central Africa. But it didn’t have enough qualified personnel in the beginning to cope with an epidemic this size. She said MSF was forced to leave its “comfort zone.”

“The fact that for the first time in our history the teams had to build a crematorium is very exceptional for us. It’s been a very traumatic experience on top of, you know, not having the expertise to do that.”

Delaunay said the medical aid group also had to deal with economic collapse as livelihoods and trade were disrupted.

“Of course, we’re operating in war zones where there isn’t much most of the time. But in these countries there was an infrastructure. There was a lot of business. And in the course of a few weeks and months this business just stopped. So, we had to rely on our own supply chain. We could not rely anymore on the usual airlines. And also we could not rely anymore on the medical evacuation that we usually have,” she said.

MSF reported that children under five and adults over 45 had higher mortality rates from Ebola. And those who had more of the Ebola virus in their bodies, which can be shown through tests, also did worse.

MSF was opposed to the imposition of quarantines as a means of containing the epidemic and finding new patients. Watson-Stryker said they were often imposed in a brutal way. She said families would find out loved ones had been diagnosed with Ebola when armed police or soldiers showed up and cordoned off their homes.

Often pregnant women had to deliver babies unassisted because they were in the quarantine zone. Gillian Burkhardt, an obstetrician and gynecologist, explained other problems of being pregnant during the Ebola outbreak.

“Women who go into labor during the time of the epidemic have similar symptoms that may be confused with Ebola. And so the first problem is how do we care for pregnant women that don’t have Ebola when a health system has shut down? We saw a lot of women, actually, who were pregnant, and had Ebola survive. But none of the fetuses have survived. And so all women have delivered a stillbirth, who have been Ebola positive and survived,” she said.

Eventually, Guinea and Sierra Leone will join Liberia in being declared Ebola-free. But MSF said celebrations will be tempered by what’s been lost.