Update Required To play the media you will need to either update your browser to a recent version or update your Flash plugin.
Joe DeCapua
December 11,2014


A large-scale campaign has been launched in Sierra Leone to distribute malaria drugs to one-and-a-half-million people. It’s being done because many infected with malaria parasites have the same symptoms as those with Ebola.

Doctors Without Borders and the Ministry of Health are distributing the drugs in the capital Freetown and five nearby districts.

Teresa Sancristóval is emergency desk manager for the medical aid group, also known as MSF. She’s in Freetown and coordinating the distribution of the antimalarials. 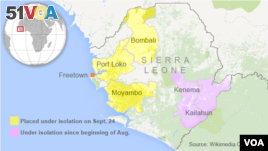 “Malaria is one of the main burdens for the population. Sierra Leone is the fifth country with the highest prevalence of malaria. Many, many people die of malaria or have complications with malaria,” she said.

Malaria is the biggest killer of children under age five in Sierra Leone.

The door to door distribution of the malaria drugs is expected to ease the burden at Ebola treatment centers – and also help prevent malaria patients from also becoming infected with the Ebola virus. About 6,000 Ministry of Health volunteers are distributing the medication that is used to both treat and prevent malaria.

Sancristóval said it’s difficult to tell the difference between those with symptoms of malaria and those with Ebola.

“You have fever. You have vomit, diarrhea. You have a lot of common symptoms between both of the diseases. Normally, you can presume that something is malaria. You have to be sure if it is malaria or if it is Ebola.”

She said those suspected of having Ebola must be isolated and tested.

It’s unclear whether there’s actually an increase in malaria cases this year. That’s because fewer people are going to health centers out of fear of catching Ebola.

The MSF emergency desk manager said a second mass distribution of anti-malaria drugs is scheduled for early January in Freetown and the Western area.

As the Ebola crisis continues, Sancristóval described the situation as “alarming.” Sierra Leone has more new cases being reported then Liberia and Guinea.