Update Required To play the media you will need to either update your browser to a recent version or update your Flash plugin.
Joe DeCapua
January 22,2015


Even though the Ebola outbreak in West Africa continues, the U.N. says it’s time to plan for the recovery of Guinea, Liberia and Sierra Leone. A joint mission has just completed its assessment in Sierra Leone.

The U.N. Development Program led the mission in Sierra Leone. It included representatives of the World Bank, the African Development Bank, the EU and other U.N. agencies.

U.N. Resident Coordinator David McLachlan-Karr said, “The purpose was to try and work in a coordinated fashion towards gauging the socio-economic impacts of Ebola on Sierra Leone. This country has taken a very hard hit. And Ebola itself I think has exposed a number of the structural weaknesses that need urgent attention by the international community.”

The mission has assessed how Ebola battered Sierra Leone’s economy. 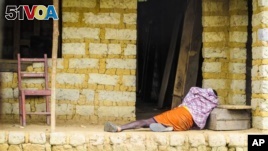 In this Tuesday, Oct. 21, 2014 file photo, a man suffering from the Ebola virus lies on the floor outside a house in Port Loko Community, situated on the outskirts of Freetown, in Sierra Leone. (AP Photo/Michael Duff, File)

He said, “Growth in 2013 was predicted to be about 11-percent. 2014, we think, overall, it will be about four-percent and then 2015, it could be less than two-percent. That itself will tell you just what an enormous impact Ebola has had across the economy as a whole. Investment has basically dried up as companies have left the country fearing, of course, contagion.”

The mission has identified “key areas” for recovery, including infrastructure and basic services, sanitation and health.

“Health, of course, is absolutely fundamental to – not only getting over Ebola – but also for the future development of this country. That sector really needs a lot of support at a structural level. There are systemic problems in terms of the lack of doctors and nurses – the lack of hospitals – the lack of, shall we say, local health clinics. And these are going to have to be addressed I think very aggressively,” he said.

McLachlan-Karr said that very large parts of Sierra Leone lack access to clean water and latrines. That creates breeding grounds for mosquitoes and increases the risk of malaria.

“Then, of course, there’s the education sector. About 25-percent of children, even before Ebola, were not even in the school system. We need to, in a way, re-set the agenda on education and have serious discussions to ensure that this country doesn’t go backwards on the literacy gains of the past decade -- but also can ensure that’s there’s more inclusive education across the sectors,” he said.

“There are inefficiencies,” he said, “There are accountability and transparencies that we need to build into service delivery in this country. And we’ll be working very seriously with the government about having a conversation on how the U.N. system and the international community can support public sector reform in order to ensure that social services – not only decentralize – but actually really deliver on the services they’re meant to provide to the people.”

The UNDP official also said the private sector has a “huge role to play” in Sierra Leone’s recovery. But that requires restoring investor confidence in the country.

A recovery strategy could be in place in a few months, but, he says, that depends on how much progress has been made against Ebola. In December, about 500 new cases were being reported each week. It’s much lower now.

“We’re not out of the woods yet. We’re still having in the vicinity of a hundred to two hundred cases per week, which is far too many. Diseases contagious as Ebola, one case is too many. We still have a major health crisis on our hands, which needs to be brought under control as quickly as possible, said McLachlan-Karr.