Update Required To play the media you will need to either update your browser to a recent version or update your Flash plugin.
Joe DeCapua
January 14,2015


The World Bank says the economies of Liberia and Sierra Leone continue to be hard hit by the Ebola crisis. The effects of the outbreak have spread throughout the countries, and not just the areas with the highest infection rates.

The latest World Bank report focuses on how the epidemic is affecting families. That is, at the household level. Nearly half of Liberian heads of households are out of work, while in Sierra Leone, many in urban areas have lost their jobs. 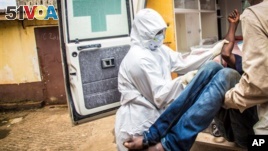 In this Wednesday, Sept. 24, 2014 file photo, health workers load a suspected Ebola patient into the back of an ambulance in Freetown, Sierra Leone. (AP Photo/Michael Duff, File)

“Our concern is that as we focus on the health aspect,that is beginning to resolve itself, particularly in Liberia and hopefully soon in Sierra Leone. But there are a lot of impacts that could be long term for the economies. And we want to make sure that we start the dialogue for the impact on households.”

She described some of the job losses.

“In Sierra Leone, our latest report found that there are nearly 180,000 workers that are outside agriculture that are no longer working. And this is particularly impacting petty traders. We’ve seen they’ve lost a lot of jobs and that those that are still operating their revenues declined almost 40 percent,” she said.

In Liberia, the World Bank reports women are “particularly vulnerable as the labor market stagnates.”

Himelein said, “Many women are involved in petty trading and this is non-agricultural self-employment. And this is a sector where we’ve seen the largest impacts. So, as markets have closed down and these women have not had a place to sell their goods, they’ve had to consume their working capital. They’ve had to spend that money to meet household demand.”

Households in both countries have been forced to make short-term economic decisions to cope with job losses or food shortages.

“That puts their future well-being in peril. For example, in Liberia, 80 percent of those surveyed had either sold assets or slaughtered livestock or borrowed money, spent savings, delayed investments. And when they take these types of coping actions – while they’re completely understandable in the short term – they really impact the households’ ability to maintain their standard of living or to move out of poverty in the future,” Himelein said.

Other survey findings show that more people seeking treatments for illnesses other than Ebola are avoiding health clinics in Sierra Leone’s capital Freetown. Himelein said they’re afraid of getting sick with the virus. In Liberia, many said they do not have enough money to buy rice, regardless of the price.

The World Bank senior economist explained how the economic survey is being conducted.

The Gallup Organization is conducting the phone surveys in Liberia in conjunction with the Liberia Institute of Statistics and Geo-information Services. In Sierra Leone, information is collected by Statistics Sierra Leone in partnership with Innovations for Poverty Action.