Update Required To play the media you will need to either update your browser to a recent version or update your Flash plugin.
By Lisa Schlein
08 April, 2019


Heavy rains are expected to fall in a few weeks. Aid agencies are racing to shore up flimsy shelters and stabilize shaky terrain before the monsoon season begins. The U.N. refugee agency(UNHCR) says the work ahead is monumental but preparations are off to a better start this year than last.

Aid agencies last year had to deal with the massive influx of more than 740,000 Rohingya refugees fleeing violence and persecution in Myanmar. They arrived over a period of a few months, straining local resources and requiring vast amounts of humanitarian assistance.

UNHCR spokesman Andrej Mahecic tells VOA there is a clear danger of this untenable situation becoming an emergency within an emergency if the vulnerable camp site is hit by a cyclone or torrential rains. 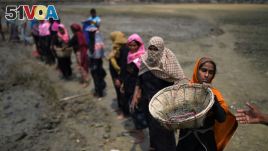 FILE - Rohingya refugee women carry baskets of dried out mud from the riverbed to help raise the ground level of their camp in preparation for monsoon season, in Shamlapur refugee camp, in Cox's Bazaar, Bangladesh, March 24, 2018.

“Thanks to the mitigating work that has been done and there was some heavy engineering work in terms of flattening of the land, flattening of the hills…A lot of the work has also gone into shoring up the steep hills to prevent the landslides. We have also moved more than 26,000 refugees to safer locations,” he said.

Mahecic says all the mitigating work has paid off. He says the refugee settlement made it through last year’s monsoon season without any major incidents or substantial loss of life.

“There are assessments that if the camps were to be hit frontally by a cyclone, that possibly up to 70 percent of the shelters would be destroyed,” Mahecic said.

Besides strengthening camp infrastructure, Mahecic says Rohingya refugees are being trained as first responders ahead of the cyclone. He says aid workers are going from house to house to inform people about the safety measures they need to take to better protect themselves from the monsoon.

During the monsoons, he says volunteer first responders will tell families how to prevent the spread of disease and will offer counseling in case of need.