Pangolins Are Most Trafficked Mammal

Update Required To play the media you will need to either update your browser to a recent version or update your Flash plugin.
Joe DeCapua
July 15,2015


Have you ever heard of a pangolin? A lot of people haven’t. It’s also known as a scaly anteater. Conservation groups say it’s the world’s most illegally trafficked mammal. The U.S. government is being asked to designate seven species as endangered.

“Pangolins are indeed the most threatened mammals in the world right now. And there are eight species in the world. There are four in Asia and four in Africa. They are mammals, and they’re covered in scales from their head to their tail. The scales are made of keratin, which is the same ingredient that’s in our nails,” he said. 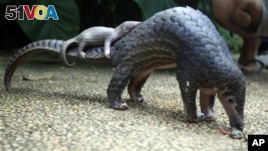 Born Free USA and others are asking that seven of the eight pangolin species be protected under the U.S. Endangered Species Act. One already has been listed as endangered.

“They’re basically endangered because parts of Asia and parts of Africa believe that their scales have medicinal value. And so they’re highly sought after for their scales and their meat, which is considered a delicacy in many different countries in Asia and Africa,” said Morrison.

China and Vietnam are the biggest markets for illegal pangolin products, as they are for ivory and rhino horns.

“Even though they’re so endangered, most people don’t even know they exist. They could go extinct before people even heard about them. The reason most people haven’t heard about them is they’re nocturnal. They’re highly elusive. So, it’s extremely hard for scientists to come across them in the wild and they can’t be bred in captivity. Rarely any, if any, exist in zoos. I think they’re about three in zoos worldwide,” she said.

Their populations are falling fast.

Morrison said, “We have found that more than 960,000 pangolins were illegally traded over the past decade. So, when you compare those numbers to elephants and rhinos it is a much, much, much larger scale.”

There is a market in the U.S. for illegal pangolin products. Getting the mammals included in the Endangered Species Act would ban the import and sale of the animals or their parts. Morrison says it would also heighten awareness about the mammal with the very long, sticky tongue.

Morrison said loss of the pangolins could damage ecosystems.

“They regulate insects. They eat ants and termites. So, if we lose pangolins, there would be a cascading effect on the ecosystem.”