Update Required To play the media you will need to either update your browser to a recent version or update your Flash plugin.
Henry Ridgwell
May 03,2016


LONDON— Turkish citizens could soon benefit from visa-free travel to Europe, as part of the deal between the EU and Ankara to stem the flow of refugees. In return, Turkey has pledged to crack down on the smugglers and keep the migrants on Turkish soil.

However, many European lawmakers have threatened to use their veto on the visa issue to block the migrant deal.

European Union figures show just over 26,000 refugees arrived on the Greek islands in March — less than half of February's total. EU officials point to those numbers as proof that the deal with Ankara is working. 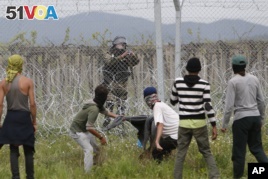 "If we did nothing, we will condemn Greece to become a huge, huge refugee camp with hundreds of thousands refugees stuck. That is what we needed to solve," Frans Timmermans, the European Commission's vice-president, said last week.

Turkey says it is on track to meet all the criteria laid down by Europe ahead of the June deadline — and insists visa-free travel is a non-negotiable part of the migrant deal.

But in Germany, analysts say fears over a wave of Kurdish asylum seekers from Turkey are driving up anti-immigration support. Exacerbating those fears is the escalating conflict between Kurdish PKK rebels and the Turkish government.

But such concerns are misplaced, according to Ibrahim Sirkeci, RIA Professor of Transnational Studies at Regents University in London.

"Any Kurdish citizens of Turkey applying for asylum in Europe will be refused,” he said. “It will be desk rejection, immediate rejection. This has been the case anyway for a long while."

While right-wing politicians look to benefit from fears of migration, some lawmakers in Brussels have threatened to try to block the deal with Turkey over human rights concerns.

Amnesty International accuses Ankara of forcefully returning hundreds of unregistered refugees back to Syria — and even of shooting Syrians trying to cross the border illegally.

It's not only the rights of refugees in the spotlight. Critics say fundamental rights are under attack in Turkey.

Prosecutors have opened more than 1,800 cases against people for insulting President Recep Tayyip Erdogan since 2014.

"This is about only silencing political opposition,” he told reporters. “This is about intimidating people and scaring the country so that no one criticizes the government."

Sirkeci argues that Europe's actions negate any claim of moral superiority in Brussels by "… abandoning a huge population who are in need of humanitarian protection. Europe says, ‘OK, instead of taking and helping you, we will just let you stay wherever you are, and instead we will pay Turkey 6 billion euros to keep our borders shut down.' That is what Europe is losing."

But even as Europe attempts to close one route, another is expanding fast. Tens of thousands of migrants have made the journey from Libya to Italy in recent weeks, and more are expected as summer brings calmer seas.