Update Required To play the media you will need to either update your browser to a recent version or update your Flash plugin.
By VOA
Oct 4, 2017


President Donald Trump addressed a group of African leaders during his trip to New York. He told them, "We hope to extend our economic partnerships with countries [that] are committed to self-reliance and to fostering opportunities for job creation in both Africa and the United States."

Africa has tremendous business potential and represents a vast array of markets. Indeed, ten of the world's fastest-growing economies are in Africa. President Trump noted that "increasing American trade and investment across diverse industries -- including agriculture, energy, transportation, healthcare, travel, and tourism -- will further transform lives throughout the continent."

The U.S. Millennium Challenge Corporation administered by the State Department is already considering an investment worth hundreds of millions of dollars in Côte d'Ivoire, which has made impressive economic reforms.

"We also hope that African firms -- like the company Sasol – [will] consider making investments in the United States" said President Trump. Sasol is building a 9 billion dollar petrochemical plant in Louisiana, which will create many new jobs in the state. 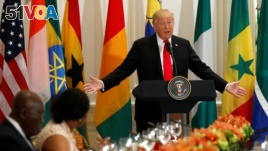 U.S. President Donald Trump speaks during a working lunch with African leaders during the U.N. September 20, 2017.

The U.S. will continue its partnership with African nations on critical health initiatives, as well.

With regard to addressing conflict in Africa, the United States is committed to partnering with countries and organizations, like the African Union, to end violence, counter terrorism, and respond to humanitarian crises.

Terrorist groups, such as ISIS, al-Shabaab, Boko Haram, and al Qaeda continue to threaten too many African countries. "The United States is proud to work with [these nations] to eradicate terrorist safe havens, to cut off their finances, and to discredit their depraved ideology," said President Trump.

The U.S. is monitoring the ongoing violence in South Sudan and the DRC, where millions of lives are at risk. "Real results in halting this catastrophe," said President Trump, "will require an African-led peace process." Toward that end, U.S. Ambassador to the United Nations Nikki Haley will be traveling to the continent to discuss avenues of conflict resolution and prevention.

The United States., said President Trump, believes that free, independent, and democratic nations are the best vehicle for human happiness and success, including in Africa.