A Failure at the Security Council

Update Required To play the media you will need to either update your browser to a recent version or update your Flash plugin.
By VOA
Apr 8, 2018


The conflict in Syria, which started when peaceful protestors urging reform were met with brutal military force by Bashar al-Assad, has entered its eighth year. The carnage has been unspeakable: hundreds of thousands dead; millions displaced; untold thousands disappeared into prisons.

Yet UN Under-Secretary-General for Humanitarian Affairs and Emergency Relief Coordinator Mark Lowcock said recently that “the last few months have been some of the worst yet for many civilians inside Syria.”

A leading candidate for the location of the “worst yet” is eastern Ghouta, where in February the Syrian government, with Russian air support, launched a large military operation against one of the last remaining rebel-held enclaves, in order to force the residents into submission and surrender. 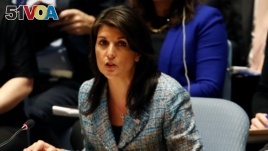 The assault began in spite of a unanimously adopted Security Council resolution on February 24 that called for a 30-day ceasefire throughout Syria to enable humanitarian aid and medical assistance to reach sick and starving civilians.

“History will not be kind when it judges the effectiveness of this Council in relieving the suffering of the Syrian people,” U.S. Permanent Representative to the UN Nikki Haley told the Council March 27, noting that since the cease-fire was agreed upon, “Seventeen hundred Syrian civilians were killed in just the last month alone.”

“But we cannot,” she said. “We cannot take these actions because Russia will stop at nothing to use its permanent seat on this Council to shield its ally Bashar al-Assad from even the faintest criticism. And we cannot take these actions because instead of calling out how Assad, Russia and Iran made a mockery of our calls for a ceasefire, too many members of this Council wanted to wait.”

Ambassador Haley said, “This should be a day of shame for every member of this Council. And it should be a lesson about what happens when we focus on fleeting displays of unity, instead of on what's right. For those who think otherwise, the people of eastern Ghouta deserve an explanation.”