Update Required To play the media you will need to either update your browser to a recent version or update your Flash plugin.
Joe DeCapua
March 23,2015


The U.N. Food and Agriculture Organization said farmers in Central African Republic are in urgent need of seeds and tools. Several years of conflict and violence have disrupted agriculture and created widespread food insecurity. The FAO has made an urgent appeal for more than six million dollars to help rebuild the agricultural sector.

The planting season begins next month in Central African Republic. The rains have started and the soil is rich and plentiful – perfect conditions to produce a bountiful harvest. The problem is over 440,000 people have been displaced in CAR’s conflict. About half are displaced within the country, the rest are refugees in Cameroon, Chad and DRC. Many of them are farmers.

The FAO estimates about one and a half million people are currently food insecure in the country – a figure, it says, is “likely to rise without immediate support.”

Jean-Alexandre Scaglia --FAO’s representative in CAR – is in the capital, Bangui. He said, “The main, main help farmers need is really seeds. We identify more than 150,000 families, households, in need of seeds.”

Many farmers have had their seeds and tools looted. 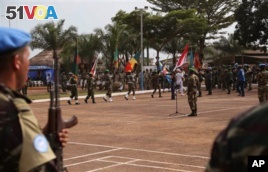 “Farmers just don’t have even a single seed to plant for the next cropping season. When I say seed it means mainly ground nuts, sorghum, maize, staple foods – and hoping that they will harvest enough in November / December for the family, which is something absolutely possible,” he said.

Of the150,000 families identified as needing immediate assistance, funding has been received for more than 86,000 of them. But the FAO said more than $6 million is needed to assist the remaining 63,000 for the upcoming planting season.

“They need veterinary drugs and vaccination for their animals and mainly cattle.”

In March 2013, Seleka rebels toppled longtime President Francoise Bozizé. Rebel leader Michel Djotodia declared himself president. From there the situation deteriorated with former rebels attacking mainly Christian communities. That led to revenge attacks by anti-balaka militias. Djotodia was forced to resign and Catherine Samba-Panza became interim president in January of 2014. But insecurity and violence remain in many parts of the country, despite the presence of peacekeeping troops.

Scaglia said, “People have no hope because they have no job, no work. How we can help this population to go back, get some livelihood, get some money, will be probably the main contribution – more than anything else – to the peace process in the Central African Republic.”

This year’s agricultural campaign in CAR was planned by the Food Security Cluster. It’s led by the FAO and World Food Program and includes about 70 other organizations.