Update Required To play the media you will need to either update your browser to a recent version or update your Flash plugin.
Michael Bowman
April 10,2016


The next U.S. presidential primary contest is more than a week away, but there is no lull in campaigning as front-runners in both parties look to boost their delegate leads and challengers argue the nomination could still fall within their grasps. The all-critical delegate math is far more straightforward on the Democratic side than on the Republican.

“It is great to be home. This is home,” Trump said about New York. 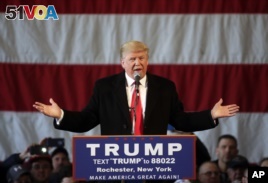 And the state Hillary Clinton once represented as a senator.

With time dwindling to overtake the front runners in the delegate count, challengers are waging battles of perception. Sanders insists he retains a path to the nomination.

“If we can win here, it absolutely opens the door to a path toward victory to the White House," said Sanders. "When the voter turnout is high, we win.”

Cruz, meanwhile, is making a more complicated argument: that he could win the nomination even if he trails Trump in delegates heading into the Republican National Convention in July.

After a poor showing in Wisconsin, Trump shook up his campaign staff. But his rhetoric is unchanged.

Clinton, meanwhile, says she is impatient to wrap up the Democratic contest so she can focus on the general election.

“We are on the path to the nomination, but I need to win big here in New York, because the sooner I can become the nominee, the sooner I can turn and unify the party – and the sooner we can go after the Republicans fulltime,” said Clinton.