Update Required To play the media you will need to either update your browser to a recent version or update your Flash plugin.
Aru Pande
February 09,2016


MANCHESTER, NEW HAMPSHIRE— Talk at a pro-Palestinian rally in downtown Manchester is not about the weather or the primary, but why President Barack Obama has not yet shut down the Guantanamo Bay prison.

“He’s been wanting to close Guantanamo from the start. [Some say] ‘Oh, he broke his promise,'" a man at the rally said.

Former Peace Corps member Tom Coffman is here to stand up to what he calls a fascist Donald Trump and a fascist Israel.

“I watched fascism be destroyed in South Africa, it’s time to destroy fascism in the Middle East,” Coffman said while holding a sign asking “Got Democracy?” 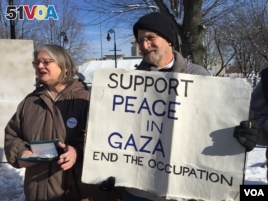 At this small, silent protest, it’s not national security or the economy that will determine Mary Wilson’s vote – but the Israeli-Palestinian conflict that is rarely mentioned by American politicians.

The small group of silent protesters includes Veterans for Peace member Art Desmarais, who questions U.S. policy overseas, whether it is the war in Iraq or Afghanistan.

“Every soldier wants to defend his homeland and their country, but they want to do it under the right ideas, ideas that we were founded on, not ideas that the government says we need to go here and do this or that,” Desmarais said while wearing his U.S. Army uniform.

When it comes to casting his ballot in the presidential election, Desmarais said he will be thinking beyond his backyard.

“I guess its about finding someone who is going to make choices, not just for us, but the rest of the world, so they have some sense of humanity,” he said. 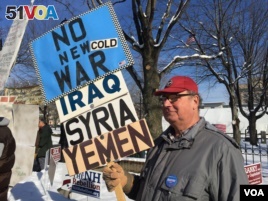 The sentiment is shared among many here, who say they are skeptical any presidential candidate, whether Democrat or Republican, will be able to make a truly positive difference when it comes to U.S. policy overseas.