From Golf Range to Free Range

Update Required To play the media you will need to either update your browser to a recent version or update your Flash plugin.
Erika Celeste
April 27,2016


GRAFTON, OHIO— There’s a growing trend in the United States to let old or underused golf courses revert back to nature. One parcel in Grafton, Ohio, converting 39 hectares of land back to green space is a lot more complicated than just not mowing the fairway.

In the game of golf, a “mulligan” is slang for a second chance. Not long ago, Royal Oaks Golf Club got a major mulligan of its own when the underused property was turned into a nature preserve. Cart paths were converted to walking trails and water hazards became fishing ponds. That’s finally given Jerry Jewell a chance to enjoy the green space. 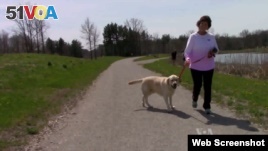 "I lived there before when it was a golf course but I never came back and played golf on it. So I never got a chance to see what it looked like as far as the landscape and stuff," said Jewell.

Jewell’s story is something that Joe Leslie with Western Reserve Land Conservancy has heard many times. "There’s a select number of people who would use a golf course, whereas in the case of a passive or active recreation area for that matter, it gives the opportunity for many more people to use it," he said.

Western Reserve has worked on 10 similar projects in Ohio, and golf courses across the country are being returned to the “wild.” The trend is being fueled by a recovering real estate market, the declining popularity of golf, and the clubhouses and restrooms already on the site. But that return comes with costs.

"Because conversion to a golf course has stripped away some of those natural resource attributes that would allow us to get some of our public funding," Leslie explained.

So his team replaced the greenway grasses with native plants, and reintroduced native species. And they had to deal with the residual pesticides and fertilizers that kept the green, green.

Western Reserve partnered with the County Parks Department on the conversion. Parks director Jim Ziemnik said despite the cost, many of these projects add economical and ecological benefits to the community, such as flood prevention. "We also know historically that this used to have a lot of wetland — the soil type. So eventually, we’re looking at developing some wetlands," he added. 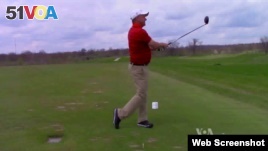 Not long ago, Royal Oaks Golf Club got a major mulligan of its own when the underused property was turned into a nature preserve

Returning Royal Oaks to its natural state will allow it to filter heavy snow melt or rainfall into the river instead of into the basements of surrounding homes and businesses as it has for years.

As for Jerry Jewell, who now uses the park every day, he doesn’t mind waiting. With what he’s seen so far, he believes things will only get better.