Update Required To play the media you will need to either update your browser to a recent version or update your Flash plugin.
By VOA
Oct 5, 2016


Gender equality has powerful potential to improve the economy, security and the overall well-being of a population.

“If the world closed the gender gap in workforce participation, global [Gross Domestic Product] would increase by 28 trillion dollars by 2025... That's about a quarter of the world's current GDP, and almost half of the world's current debt,” said U.S. Ambassador-at-Large for Global Women's Issues Catherine Russell in a recent speech. She also noted that “studies have found that countries with less gender inequality are more secure, and peace agreements last longer when women are at the negotiating table.”

Nonetheless, no country in the world can boast that it has achieved full gender equality.

“Around the world, women are vastly underrepresented in politics and the workforce, particularly in leadership positions and other high-paying jobs,” said Ambassador Russell. At the same time, women make up the bulk of the poor. “I've heard people say that poverty has a female face, and that makes sense when you consider that women control just one-fifth of global wealth,” said Ambassador Russell. 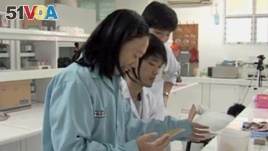 Women Scientists working in a science research lab in Jakarta.

World leaders are beginning to recognize that everyone benefits from advancing gender equality, she said. This is why gender equality is part of U.S. foreign policy. A key part of U.S. efforts focus on educating and empowering girls. In the past 18 months, the United States launched its global strategy to empower adolescent girls, as well as Let Girls Learn, which is a Presidential initiative that focuses on educating girls.

We are also working with numerous countries to dismantle barriers that keep women from inheriting or owning property, entering the formal job market or accessing banking services.

“Gender equality sometimes looks like an impossible task—a pursuit without an end,” said Ambassador Russell. “But...we can make progress, and that progress is worth making. Little by little, discussion by discussion, step by step, we can improve the lives of women and girls, men and boys all around the world. And in doing so, we can reach our shared goals of peace, prosperity, and security.”