Update Required To play the media you will need to either update your browser to a recent version or update your Flash plugin.
Henry Ridgwell
January 13,2016


LONDON— Germany has outlined plans to tighten deportation laws for foreigners in the wake of the series of attacks on hundreds of women in Cologne and other cities on New Year’s Eve. Police say the attacks appear to have been carried out by groups of young migrant men. Nineteen suspects have so far been identified, all of them migrants. There have been several revenge attacks against foreigners in Cologne.

Far right supporters and football hooligans smashed shop windows and damaged cars in the eastern city of Leipzig in the early hours of Tuesday. 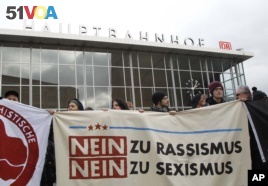 People protest in front of the main station in Cologne, Germany, on Wednesday, Jan. 6, 2016. The poster reads: "No to Racism, No to Sexism". More women have come forward alleging they were sexually assaulted and robbed during New Year's Eve.

The rampage began around the same time that 2,000 supporters of the anti-Islamic PEGIDA movement demonstrated nearby, carrying signs with slogans like "Freedom for Germany."Olaf Spermer was among the protesters.

Spermer said what has really annoyed them in recent months is the whole situation regarding foreigners and how things have been handled. He said he's not alone in how he feels and that many people think things will end in a very bad way.

Police lead away a man at the main train station, Jan. 12, 2016, in Cologne, Germany. New Year's Eve sexual assaults and robberies in Cologne were blamed largely on foreigners and pushed the discussion about the migration crisis.

Police have recorded more than 500 criminal complaints from New Year's Eve, almost half of which involved sexual assault.Andrea Mammone, an expert of the European far right at Royal Holloway, University of London, said anti-immigrant groups are exploiting the attacks for political gain by... “...trying to spread this message that ‘we told you.

In a series of revenge attacks on foreigners in Cologne, six Pakistanis, two Syrians and three men from Guinea were injured. 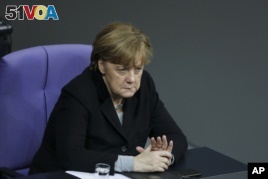 She said Germans know that since the terrible events of that night in Cologne, for integration to work, society needs to be open; but, she said, the refugees also need to be willing to follow the country's rules and values.

Cologne police have set up a 100-strong team to investigate the New Year’s Eve attacks and are looking at exchanges on social media in the run-up to the night.