Update Required To play the media you will need to either update your browser to a recent version or update your Flash plugin.
Joe DeCapua
June 10,2015


It’s estimated thousands of children in Ghana work in dangerous, unlicensed gold mines. A new report says they risk injury when mines collapse and are exposed to dust and mercury poisoning.

HRW Senior researcher Juliane Kippenberg, in Accra, said, “This has been going on for a long time because artisanal and small-scale gold mining is a very longstanding and old practice in Ghana, but also in other parts of West Africa. Child labor in this sector is something that’s also been going on for a very long time. According to a recent survey by the government, around 7,400 children are working in mining.”

The gold mines are often shallow pits that that can collapse, causing injury or death. 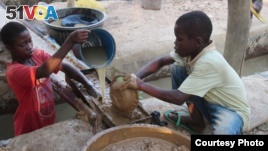 “We also found that many children do the processing of the ore with mercury. And mercury is a toxic metal. It’s liquid and it’s used to attract the gold particles in the ore. It’s very practical for that, but it’s also highly poisonous and particularly dangerous for children, whose bodies are still developing. We met one boy who was actually carrying around with him a small bottle of mercury that he was sort of carrying in his trousers,” she said.

Kippenberg said, “There are other problems, too. Some boys carry extremely heavy loads and this causes really strong pain for them, but also can obviously lead to long-term spinal damage.”

And then there’s the dust.

“Some of the children that we interviewed complained about coughs and other respiratory problems and that they were spitting out blood.”

Kippenberg said many children want to work in the mines because they receive some payment or some gold in return. But she says they’re often unaware of the risks.

Ghana has many different mining areas, but Human Rights Watch has been conducting its research in the Western, Central and Ashanti regions since 2013.

Overall, Kippenberg said gold mining employs between a half million and one million people. Last year, the industry produced about 40 tons of gold worth more than $1.7 billion.

The gold travels a long supply chain, from local traders to exporters and then on to the global market. Switzerland, South Africa, the United Arab Emirates and India are some of the major destinations.

“You have many, many different, sort of, local traders and some exporters, who then sell on to an even smaller number of global refiners," Kippenberg said. "There are only about 20 or so international refiners of importance that refine pretty much all the gold there is in the world. So, these refiners hold a very important position in that supply chain. And from then onwards they then sell on to jewelry, banks and electronics industry and so on.”

The Human Rights Watch senior researcher said some refiners and exporters do attempt to adhere to Ghanaian and international law regarding child labor. Nevertheless, she said they often to not have full control over the supply chain and may not know the origin of the gold.

Kippenberg said that Ghana’s government has taken some action to deal with the problem.

“First of all, child labor in mining is actually prohibited by law and that’s quite a good and strong law. The government also has a sector that is formalized," she said. "So there are about 1,300 or so holders of licenses that actually have formalized mine licenses. This is very important because it means that these holders of licenses have to abide by certain rules, including no use of child labor, and they will be inspected by the government for that.”

However, she said, the vast majority of the artisanal gold mines are not licensed.

“There, child labor is occurring. There are no inspections, no interventions. It’s just taking place,” Kippenberg said.

Human Rights Watch called for greater government oversight of Ghana’s gold mining and the use of alternatives to mercury in gold processing.

Kippenberg said, “In 2013, governments came together and adopted the U.N. Minamata Convention on Mercury to protect internationally people from this threat of that pollutant. And the government of Ghana has signed that convention, but hasn’t ratified it. And we believe it’s really necessary that Ghana ratifies and implements that convention.”

She added the government-owned Precious Minerals Marketing Corporation, or PMMC, should require gold traders to follow human rights law when issuing them licenses. The government, she says, should also ensure that education and food programs reach children in gold mining areas.

Human Rights Watch called on the Ghanaian government to “lead the way in Africa by developing a comprehensive strategy for safe, professional and child labor-free gold mining.”