Giovanni Falcone and the UN Convention on Transnational Crime

Update Required To play the media you will need to either update your browser to a recent version or update your Flash plugin.
By VOA
Jul 10, 2017


Every aspect of transnational crime has wide-spread negative consequences, causing serious harm to every society, at every level.

Due to the increasingly global nature of criminal organizations, transnational crime affects all countries, and all must play their part in bringing to light the many incarnations of transnational crime, and preventing, investigating, and prosecuting them. 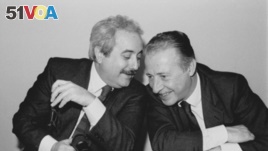 Giovanni Falcone, along with his close friend and colleague, Paolo Borsellino, was instrumental in the successful prosecution of numerous organized crime figures.

In late June, the UN General Assembly held a high-level debate on transnational organized crime, in commemoration of the 25th anniversary of the assassination of Giovanni Falcone, an Italian judge and prosecuting magistrate who dedicated his professional life working to overthrow the Sicilian Mafia.

Giovanni Falcone, along with his close friend and colleague, Paolo Borsellino, was instrumental in the successful prosecution of numerous organized crime figures, including in the Maxi Trial of 1986-1987, the biggest crackdown on organized crime in Sicily, during which 360 convictions were secured. Judge Falcone also helped foster a new era of international law enforcement cooperation by working together with the New York City Police Department, FBI, and U.S. prosecutors on their parallel efforts to combat the Mafia's illegal drug trafficking and money laundering schemes through the famous “Pizza connection” trial.

Giovanni Falcone died in May 1992, when 500 kilograms of explosives, packed into a highway culvert, were remotely detonated as Falcone drove over them.

Two months after Falcone's assassination, Paolo Borsellino was killed by a car bomb also set by the mafia.

Falcone's assassination helped pave the way for the adoption of the landmark UN Convention against Transnational Organized Crime, also known as the Palermo Convention, which came into force in December 2003.

“Judge Falcone ... was a patriot of Italy and a friend of the United States." Deputy Assistant Secretary of State Daniel Foote

Giovanni Falcone proved that there is nothing inevitable or invincible about transnational organized crime. He demonstrated that the Mafia could be defeated through painstaking investigation, cooperation across borders, and unwavering and uncompromising integrity.

“Judge Falcone ... was a patriot of Italy and a friend of the United States. Committed to dismantling the Mafia, he worked with U.S. law enforcement to share evidence, obtain witnesses, and collaborate on groundbreaking cases in Sicily and New York,” said State Department Deputy Assistant Secretary for International Narcotics and Law Enforcement Affairs Daniel Foote. “If Judge Falcone had the opportunity to meet his counterparts from 187 countries – and a treaty to help them work together – what could he have accomplished? And can we do the same?”