Update Required To play the media you will need to either update your browser to a recent version or update your Flash plugin.
By VOA
Jul 31, 2017


According to the State Department's annual terrorism report for 2016, ISIS remained the most capable terrorist organization, directing and inspiring terror cells, networks, and individuals around the world. But it suffered a long string of defeats, losing much of the territory it had controlled in Syria, and particularly in Iraq.

As its losses mounted, ISIS dispatched operatives from Iraq and Syria to conduct attacks outside of the Middle East, and also worked to inspire and encourage similar actions by its followers abroad. 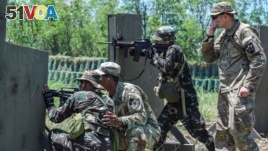 Al-Qa'ida and its affiliates exploited weak and ineffective governments and institutions in a number of states and regions to remain a significant worldwide threat. Al-Qa'ida in the Arabian Peninsula remained a significant threat to Yemen, the Gulf region, and the United States, despite a number of key leadership losses. Al-Nusrah Front, al-Qa'ida's affiliate in Syria, continued to exploit ongoing armed conflict to maintain a territorial safe haven in parts of northwestern Syria. Al-Shabaab continued to conduct asymmetric attacks throughout Somalia and parts of Kenya despite weakened leadership and increasing defections. And in Afghanistan, al-Qa'ida continued to suffer losses.

And finally, Iran remained the foremost state sponsor of terrorism globally, providing support to various terrorist groups in Syria, Iraq, and throughout the Middle East.

The State Department report includes a statistical annex prepared by the University of Maryland's National Consortium for the Study of Terrorism and Responses to Terrorism, known as START. START noted that terrorist attacks declined globally by 9 percent, while total deaths due to terrorist attacks decreased by 13 percent compared to 2015.

“This was largely due to fewer attacks and deaths from terrorist attacks in Afghanistan, Syria, Nigeria, Pakistan, and Yemen.

At the same time, there was an increase in terrorist attacks and total deaths in several countries, including Iraq, Somalia, and Turkey,” said Acting Coordinator for Counterterrorism Justin Siberell on the release of the report in late July.

The United States will continue to devote resources toward improving counterterrorism capabilities of key partner countries, while at the same time focusing long-term efforts on addressing the drivers of violent extremism.